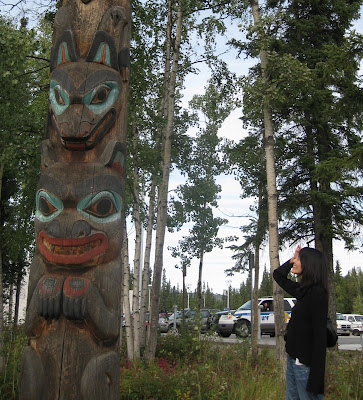 I'm the one on the right.
Online reviews are so important to me. Be it for movies, hotels, museums, or pretty much anything else, I always study them ahead of time to see what I'm getting into. These days I buy so many items on Amazon.com that when I go into an actual brick-and-mortar store, I feel paralyzed because I don't know enough about the product I'm about to buy. What if this adorable apron fades after the first wash? Is this brand of canned tomatoes better or that one -- and will it make a difference in the dish I'm making? Does the "new car smell" air freshener really smell like a new car?

These might not be the world's most important questions, but, as a savvy spender, they mean the world to me. I get so frustrated when I spend my hard-earned money on something, only to find out I need to replace it/go somewhere else/cry because it wasn't what I expected (hello, alarm clock that only works when plugged in and NOT with batteries -- a very bad thing to find out overseas where the standard voltage is different).

So, what am I an expert on? That was the question I posed to my fiance, Nick. After pausing for a few minutes and very sweetly resisting the urge to say something sarcastic, like "sleep" (which would have been accurate) , he said "Indian restaurants." Then, he added that he'd be willing to go with me to review Indian restaurants all over Southern California, where we live.

His ulterior motive aside (we both love Indian food), I agreed that, at least when it came to being a food connoisseur, about the only two things I can claim expertise in are Indian food and red velvet cake. Figuring I'd best leave the red velvet cake blog to someone in the South, this Indian restaurant review blog -- saagAHH -- was born.

saagAHH is my pun-iness coming out: "Saag" is the name of one of my favorite Indian dishes, a curry made from greens (usually spinach, mustard greens, and/or fenugreek leaves). "AHH" was originally meant to refer to "open up and say 'AHH'" but in the evolution of this blog I'm sure will refer to the sweet sigh of "'AHH'...what a satisfying meal" and the panic of "'AHH' get this 'food' off of my plate." Plus, the complete "saga" of my day-to-day life is sure to come out one way or the other on here. My fiance and I are getting married next year, and with several headstrong South Asian parents in the picture, I'm sure there will be more of a saga and more drama (in a good way, I hope) in the days to come.

Why all of the mentions of my fiance? 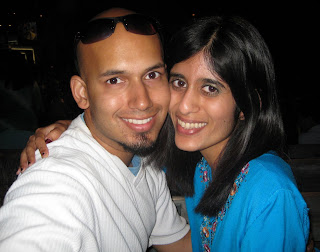 In addition to giving me the idea for the blog, Nick been playing a large role in getting me to embrace my Indian heritage. The funny thing is I always thought I'd marry a white guy, but then I fell in love with someone who's South Asian -- his ethnicity is Nepali -- and Hindu like me. The other funny thing is that his true first name is "Neeraj," which he likes to claim is his preferred name for introducing himself to Indian woman that he'd like to date (it impresses us, apparently), but since we met online (at eHarmony.com) and he'd already listed his profile name as the Americanized "Nick," I call him by an un-Asian sounding name, whereas plenty of people still refer to him Neeraj.

He's also great to have around during restaurant visits, because he'll help keep this blog real. When I told him I was a little apprehensive about saying something negative about someone else's Indian cooking, he replied, "Just quote me: I'll tell you if the food tastes like the dirt on my cleats."
Posted by Sree at 8:01 PM