The Details: Via various leadership classes, I've learned to employ the "compliment sandwich" technique of delivering criticism -- in which the negative comments are placed between two compliments on either end. (Sneaky, huh?) Supposedly, it's a good technique when the entity on the receiving end has a lot of potential but needs select improvements.

So, Bombay Tandoori, we need to talk. By the way, I like your choice of cuisine -- Indian food rocks! But, seriously, I'll have to split this review into two parts -- the banquet hall and the restaurant -- because the experience was so different in each place. (The alternative, averaging the scores, wouldn't really have done justice to either component.)

So, the Banquet Hall:

The good: The decor is appropriate -- I especially liked the hanging Indian-style fabrics draped from the ceiling.

The bad: Banquet hall guests were not allowed to park in Bombay Tandoori's own parking lot. When asked where we should park, the parking attendant shrugged his shoulders. (As a side note, that must be an easy job -- being a parking attendant for a parking lot where no one is allowed to park!) He mumbled something to the effect of, "We have to keep the lot open for restaurant customers." Ironically, after Bobby (Nick's brother) and I (with Nick) parked seven and three blocks away, respectively, we did end up becoming restaurant customers. But more on that later.

So, half an hour later after we'd trudged back to the restaurant, there was indeed a sign in front of the banquet hall that said if you parked in its lot you would be towed...sucker! (Well, the sucker part may have been added by me. But it was implied.) During dinner (in the restaurant part of the establishment), we actually saw a tow truck pull up. It's been a few weeks since this event, and I'm crossing my fingers that those poor Nepalese aunties and uncles have finally made it back home.

The event, a celebration sponsored by a Nepalese association, had started at 6 p.m., or about an hour before we arrived. We'd each paid the requested $20 event donation, then made a beeline for the buffet table. The items set out so far were appetizers. 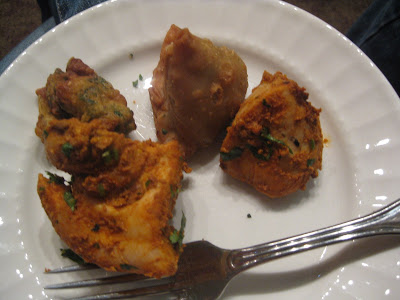 Available were Chicken Tikka, boneless chicken breast pieces roasted in a tandoor; Samosas, fried pyramid-shaped filled turnovers; and Vegetable Pakoras, deep-friend vegetables battered in chickpea flour and spices. The appetizers were OK, but Bobby and I both found them to be too salty. Nick liked them. Of course, Nick will also be the first to admit that he's currently annoyed with me for not keeping a salt shaker available in my apartment for his salting pleasure. (If food is flavorless when it's already been brought to the table, then I think it's too late for salt. At that point, I figure I'm better served spicing it up with something like chili powder,curry powder, cinnamon, or whatever spice will complement the dish.)

At about 7:45 p.m., we were starving, the scheduled entertainment hadn't started yet, and we decided to order food in the restaurant (restaurant review starts in 4 paragraphs).

When we returned to the banquet hall at about 9 p.m., the entrees had only just been added to the buffet line. And, due to the inefficient room layout, the line for food was snaking around everywhere, including completely blocking all seated guests' views of the dance floor -- where the association had planned on having various performances. Even after making an announcement that guests should get off of the dance floor, nobody budged. I don't blame them. Moving off of the dance floor meant losing your place in line, which at 9 p.m., I wouldn't have done either. (Sadly, I didn't get to try any of the food on this buffet, as I was too stuffed from having just eaten in the restaurant.)

At this point, I was seriously wondering if the room was over capacity -- all of the tables had long been filled, we were sitting in seats placed around the room's border, and some people were without seats altogether. I searched for the "max room capacity" sign and quickly found it near the entrance -- but instead of a number, it was blank.  I later found out that Bombay Tandoori says the banquet hall holds up to 250 people, but I think they must counting the seats that are immediately outside of the banquet hall.

The good: Service, in the form of picking up empty plates and the like, was prompt.

All in all, I don't think this space works for a large event. But, if you have a smaller event of 60 guests or below, don't need to use the dance floor for performances (or can get a stage built on it -- that would likely have solved the sight-lines problem), and are able to negotiate use of the parking lot, then it might work for you.

The prompt and courteous service continued in the restaurant portion of Bombay Tandoori. Our server even memorized our order without writing it down -- a party trick that has always impressed me. (Well, as long as the order comes out correctly. Which it did). 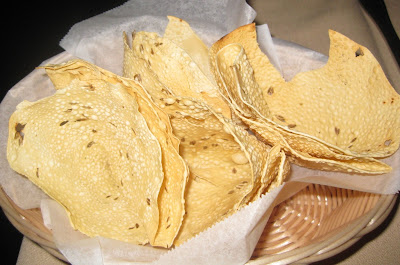 I was also impressed with the complimentary Papadum -- partly cause of the taste, but mostly because it was cone-shaped. (Can you tell I'm easily amused?) 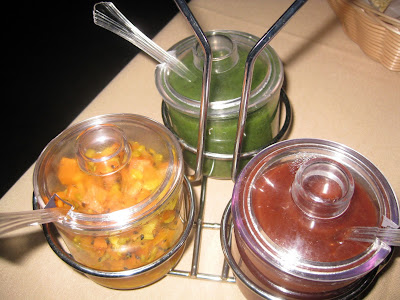 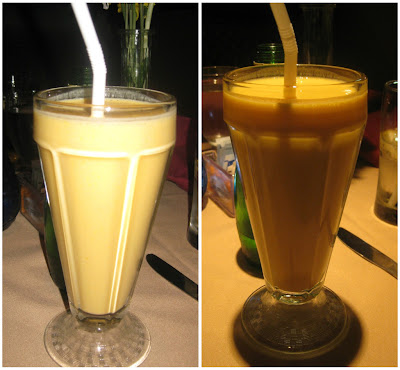 Some people order alcohol to improve a bad mood. When I'm in an Indian restaurant, I'll order a Mango Lassi. The bad mood was courtesy of the negative experience with the banquet hall, but the lassi was the perfect pick-me-up. And, no, I didn't order a "double" -- that's the same mango lassi in both photos, but doesn't it look super cool in the second photo? The first photo is more true to the drink's actual color, but I wanted to share second photo because, with the table's candlelight and without a camera flash, it looks like the lassi is glowing with a light from within. I seriously can't stop staring at it..... 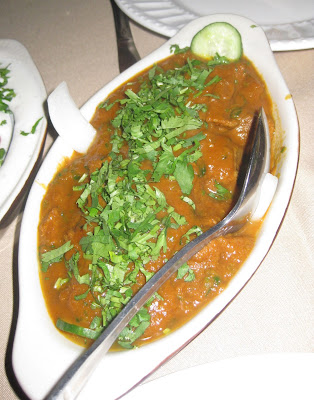 Bobby picked the Lamb Curry. It was yummy. Plus, if you like lamb, you'll be happy to know that the restaurant offers nine different lamb entrees.. 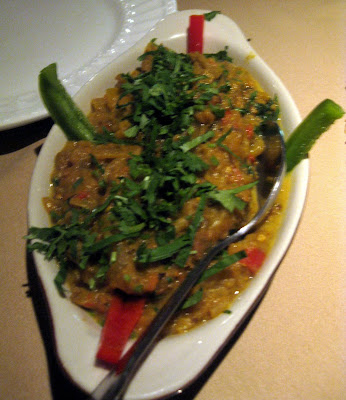 As usual, it was up to me to order a vegetable. I picked the Bengan Bhartha, described as fresh eggplant first roasted in a tandoor oven then cooked curry style with fresh tomatoes. It was tasty -- not the best Indian eggplant dish I've had but definitely above average. 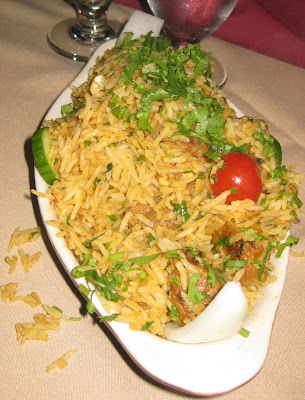 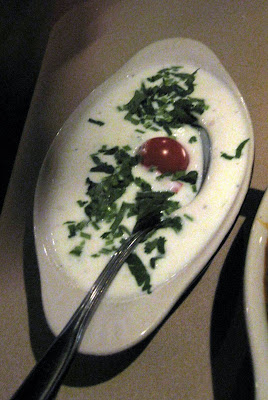 Raita, an Indian yogurt sauce, was included with our entrees. Nick and I have never cared for raita, but Bobby is somewhat of a raita connoisseur. He said it was up to par.

After we were stuffed and had declined dessert, our server brought us each a complimentary dessert anyway. I'm not exactly sure what the motivation behind that was, but I suspect it may have had something to do with how, even sitting markedly far away from the banquet hall, we were still subject to its loud music and to overhearing the "talent" show (which included a very bizarre rendition of Taio Cruz's Dynamite). All three desserts -- carrot pudding, gulab jamun, and rice pudding -- were excellent.

Have you been to Bombay Tandoori (or its sister restaurants India's Tandoori in Hawthorne or India's Tandoori on Wilshire in Los Angeles)? What is your favorite banquet hall for Indian functions in L.A.?