Love it or hate it (or do both -- I understand), when it comes to Indian cooking this fluorescent yellow spice is here to stay. 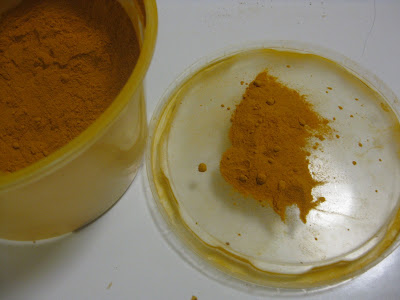 I have a love-hate relationship with turmeric. It's one of the core spices in Indian food, has compelling medicinal benefits, and plays a role in Hindu religious rituals. But it also stains like crazy, tastes bitter if you overdo it, and can make all Indian food look uniform. Seriously, have you ever seen a plateful of Indian food where all of the different dishes look straight up YELLOW? That's when I turn my back on turmeric and grab an In-N-Out cheeseburger instead. Actually, make that a hamburger. After a meal of overused turmeric, the yellow coloring of the cheese could push me over the edge.
Seriously, turmeric has been around for a long time -- likely at least 2,500 years. India is the largest producer. The plant's (part of the ginger family) rhizomes are baked, then ground to make the fluorescent yellow spice. It's employed in Ayurvedic medicine, used as a home remedy for various stomach ailments, and perhaps most compellingly, has been shown in studies to potentially increase brain function (maybe even warding of Alzheimer's disease), decrease the risk of certain cancers, and act as an anti-inflammatory (providing relief for arthritis sufferers). One of my cousin's regularly sprinkles small amounts of turmeric into all kinds of random non-Indian dishes (even her morning oatmeal) in hopes of taking advantages of its health benefits. It's also available as a supplement in pill form.

One of the traditional Hindu wedding rituals is to rub turmeric all over the bride's and groom's skin the evening before the wedding -- it's thought to impart a glow and perhaps to ward off bacteria. However, I'm most likely taking a pass on this. Somehow the night before Nick's and my wedding does not seem like a good time to be trying out new skincare products. I'm terrified that I'll wake up the next day with a full-on acne break-out.

My fear of turmeric also stems from its amazing staining ability. Seriously, I wouldn't be surprised if whoever is living in my Atlanta apartment from five years ago is still wondering what caused the yellow countertop stains that just won't come out. Clean spills immediately! To avoid staining storage containers, I typically line them with parchment paper first, then store the leftovers. Also, beware the "Indian manicure," which is when turmeric stains your nails yellow. (This, I've found, will eventually come out with repeated scrubbing with soap and water.)

Taste-wise, I find that it doesn't have a strong taste and is used more for color. But in excess amounts, it tastes bitter. Some people detect a ginger-like flavor.

How to Prepare: Buy the already ground powder from either the regular grocery store or from an Indian store (where it will likely be less expensive per ounce, but is sometimes in too large a quantity for the home cook), then sprinkle generously into any savory Indian dish. In countries where fresh turmeric is ready available (like in India), sometimes the leaves are used for cooking -- but I've never seen that in the U.S., where the powder reigns.

What is your favorite dish to put turmeric into? Do you have any tricks for stain clean-up?
Posted by Sree at 5:23 PM