Rating: 8 out of 10 Peppers = Spicy
Filling the niche for a gourmet Indian restaurant in the beach cities of the South Bay, this newly opened bistro offers a fitting atmosphere, above-average food, and good customer service. It's a bit overpriced for its niche, but go during "Sunset Hours" for a more budget-friendly bill. 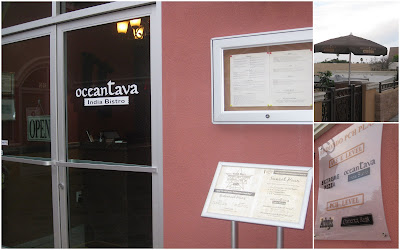 The Details: Being Indian, of course I refuse to overpay for anything. (Some members of the family, ahem, refuse to pay anywhere near reasonable value for anything, but that's not me. Not yet, anyway. Ha.) When my good friend Nicole suggested that we check out Ocean Tava, a new Indian restaurant in her neighborhood of Redondo Beach, I was intrigued. I used to live in Redondo and, though it houses two of my favorite restaurants of all time (Green Temple and Chaba, in case you were wondering), I'd never tried an Indian restaurant in its city limits. (There is at least one other one there, Addi's Tandoor, which I still need to try.) But I looked up the prices online and with the non-veg entrees ranging from about $13 to $20, I postponed a visit for a while.

Then, LivingSocial.com gave me the extra push I needed by offering a voucher, which I purchased for $20 and entitled me to $40 worth of food and drink at Ocean Tava. (Can I also just say that I'm obsessed with LivingSocial? Of all about five group coupon e-mail lists I for some reason signed up for it's definitely my fave.)

And we scheduled our double date. (If you hear groaning in the background, it's Nick. He hates it when I schedule outings with other couples, then call it a "double date" with a goofy grin. What am I supposed to call it? Our "very macho outing that just happens to be with another couple"?) Nicole, her husband Dan (if you're a Mad Men fan, be sure to check out his Telematic Dan! blog, Nick, and I went on on a Friday night.

We were fortunate that we wanted to meet for dinner at 6 p.m., because that happens to be right in the middle of the restaurant's "Sunset Hours" specials, which run Monday to Friday from 5 p.m. - 7 p.m.. During that time, select beers are $2.95, select wines $3.95, select appetizers are under $6, and select entrees are under $10. Score! I thought it was odd that the discounts run as late as 7 p.m., because who would want to eat dinner after 7 p.m. on a weeknight? But, then I remembered that, hmmm, that group includes my parents (dinner at our engagement party wasn't served until after 9 p.m., and that was actually running on time) and most other Indian aunties and uncles I know. And Ocean Tava does know its audience. When I arrived, the private parking lot was empty. When I left around 8 p.m., a car was impatiently waiting for me to back out to get my spot. (FYI, I think there are two parking lots for the restaurant: the surface lot I parked in, plus a garage in front, which Nick parked in. Also, don't quote me on this and be sure to check the signs, but I think street parking may be free too.)

Inside, I fell in love with the color scheme. It's filled with warm yellows. Yellow, I think, is underused in interior design. I love it. Also, the restaurant smelled of incense, which was reminiscent of my parents' house. The walls were adorned by wood carvings and subtle Indian paintings. The "bistro" idea is unique and fits well in a casual beach city; it manifested itself most obviously in the bistro tables placed outside. (We declined to eat outside as I'm always freezing. But I bet in the summer it would be quite nice.) 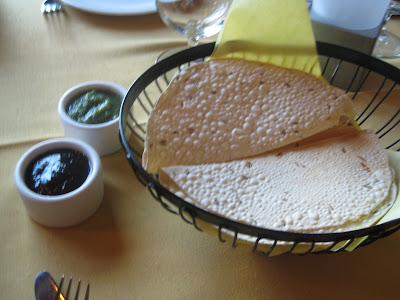 We were served complimentary Papadum, with the requisite chutneys. It was good if a touch overbrowned. 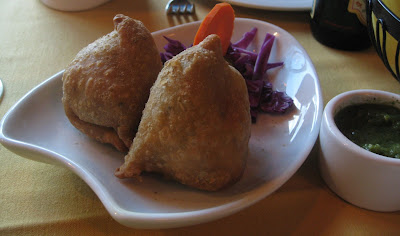 We ordered an appetizer of four-piece Vegetable Samosas, stuffed with cumin potatoes and green peas. They were tasty and I liked the presentation on the shapely plate with cabbage and a carrot slice for style. 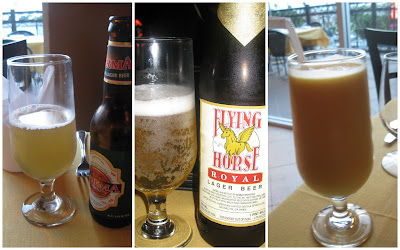 The restaurant has a few Indian beers available. Dan opted for the Karma (a lager beer) and Nick for the Flying Horse Royal (also a lager). I ordered a (non-alcoholic) Mango Lassi, which was really good. Nicole had never tries a lassi before, so she had a sip of mine and liked it. You really can't go wrong with any sweet-flavored lassi. Yum. 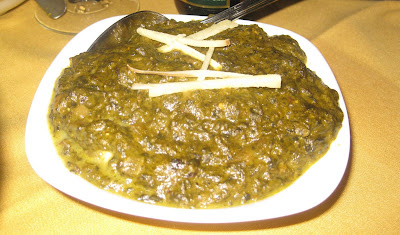 Apparently, Ocean Tava and I are on the same wavelength, because instead of a straight-up "mild, medium, spicy" choice for spice level, we were actually asked to pick each dish's spice level on a scale of 1 (mildest) to 5. Nicole was the bravest and ordered her Saag, a greens dish, at a level of 3. She really enjoyed it. I tried a few bites of it; I liked the flavoring but I could only eat the 3-level spice in moderation. I'm a wuss and if I'd ordered it, I couldn't have finished it because it would have been too spicy. 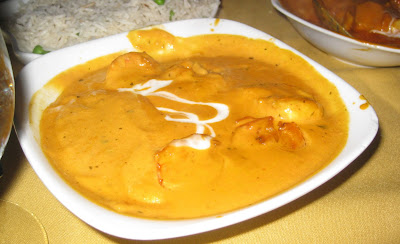 Nick ordered the Prawn Masala at a spice level of 2. He really enjoyed it. 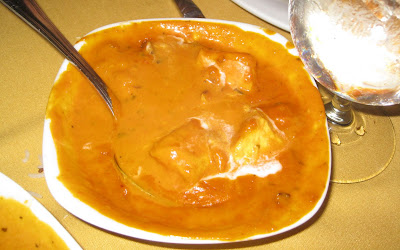 Dan got the Tava Special Fish at a spice level 2, which he let me try. It was mahi mahi cooked in the restaurant's secret recipe of herbs, raisins, and cashews. (Note: looking at the menu on the restaurant's website today, it says this dish is made with salmon. So I'm not sure if they changed it recently or what, but it was mahi mahi when Dan ordered it.) I wanted to try it because blog reader Vandana had requested some Indian mahi mahi recipes and my mom doesn't really cook with that fish, so I thought this might start giving me some ideas for a recipe for her. (I'm working on it, Vandana! Thanks for the request :) ) 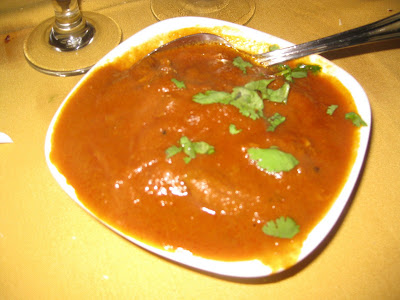 I got the Chicken Curry, also at a spice level of 2. I definitely liked it. If you're like me and you like you're Indian dishes mild, I'd say you're safe with a 2 at Ocean Tava. This was very easy to devour. 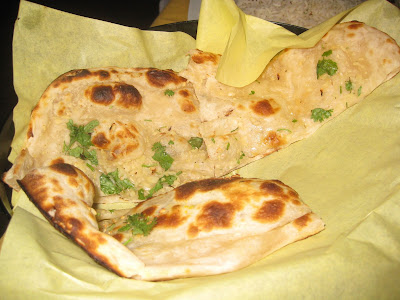 We bought an order of naan. (If you want dal, raita, and naan with your entree, you have the option to add all three for $4.)  It was OK but it was served too-cool temperature wise. 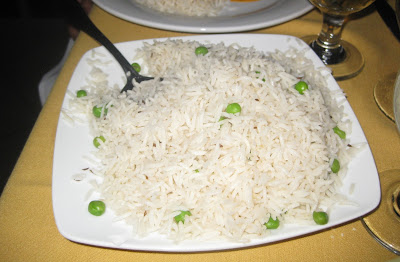 Our entrees came with Basmati rice (with peas) to share.

Overall, the customer service was good. Though one time we did have to repeat our request to have a water glass refilled. On the way out, an employee said "Namaste." I appreciate the friendly gesture.

What spice level do you think you could handle here? And what's your favorite restaurant (Indian or not) in the South Bay?