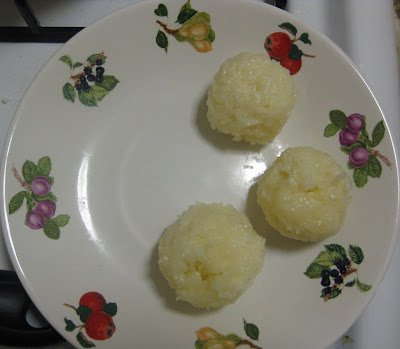 A Bengali dessert, these snowballs (otherwise known as naru) are actually great year-round.

1. (Optional) Pour the coconut and the half-and-half into the blender and blend for about 15 seconds. 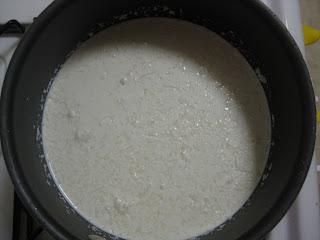 2. Pour the coconut and half-and-half into a large non-stick pot. (If you skipped Step 1, stir the two together.) Turn the heat to high until the mixture boils, then lower it to a low-ish medium. Stir occasionally.
3. While the half-and-half is reducing, line the cookie tray with parchment paper. 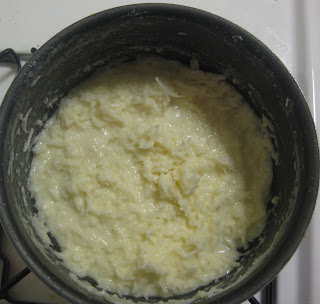 4. As the mixture reduces, you'll need to stir it more frequently. After about 30 minutes (give or take about 5 minutes, depending on a number of factors), it will look like the above picture. 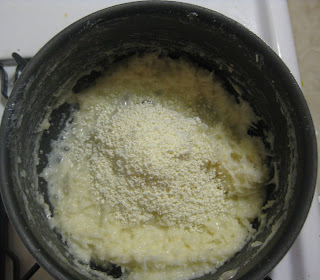 5. Pour in the dry milk. Stir through.
6. Let cool for 30 minutes. (Don't let it cool for too long, or you'll have one gigantic congealed not-remotely-snowball-shaped mess in the bottom of your pot.) 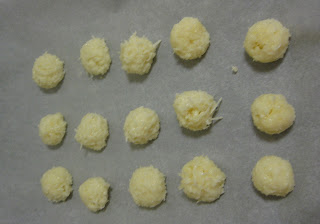 7. Take a heaping tablespoon of the coconut mixture and roll it between your palms, creating a snowball. Place on the cookie sheet and continue rolling until the pot is empty.
8. Refrigerate for at least an hour before enjoying.
Makes about 15 snowballs.

The AHH Factor: Who in her right mind would turn down an invitation to a holiday cooking exchange, right? Who, except for me, who is baking-phobic of course. Luckily, I came up with a brilliant plan to claim my cookies. And I earned them too!

So, this recipe obviously doesn't involve any baking, but it's a little exotic and plenty festive and, well, if anyone had tried to claim it wasn't a "cookie," I would simply have grabbed my free cookies and run out the door! Bah humbug. I got this recipe from my mom and it is indeed a traditional Bengali dessert. I have yet to see it outside of Bengali circles or at any Indian restaurants. In Bengali, they're known as naru (or narkel naru, if you prefer, narkel meaning "coconut") and are similar to the easier-to-find coconut ladoo, except that ladoo are a lot more complicated to make.

Oh, and about Step 1. My mom would tell you it was NOT optional. She puts it in a blender every time. Actually, I sort of led her to believe that I did too. But let's face it, the blender step would have caused me to bow out for real. And honestly, they're just as delicious without the use of a blender. So much so in fact that, embarrassingly, Nick and I ate so many that I had to make a second, much larger, batch so I'd have some to take to the exchange the next day! Oops. 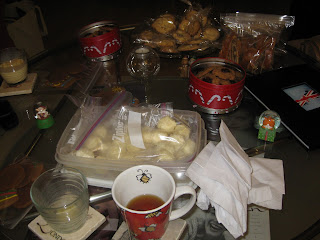 As you can see, the cookie exchange was quite delicious. And no one seemed to mind that I didn't bake my offering.

What are your favorite wintertime cookie recipes?
Posted by Sree at 7:54 AM