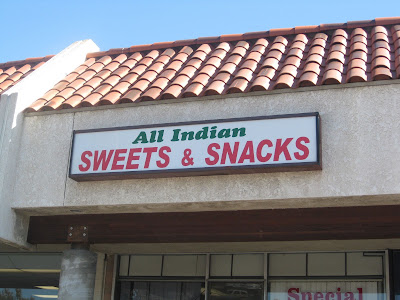 Taste-wise, the Indian food is below average, but there are some yummy sweets available, a mini-grocery store inside, and surprisingly inexpensive food options that justify trying out All Indian Sweets & Snacks if you're in the area.

The Details: Actions speak louder than words, and, as much as I love to support my neighborhood mom-and-pop restaurants, it is hugely obvious to anyone who knows me at all that I don't like the food at All India Sweets & Snacks. It is literally a two-minute drive from the office where I spend my weekdays, but I rarely ever get lunch there. Two of my best friends go there at least once a week and bring their lunches back to the office, which prompted one of my other co-workers to whisper, "You don't like that place, do you?"

No, I personally don't. Though I will say that it has improved in the five years that I've been casually avoiding it. When I first tried it, it only offered vegetarian food. It was (and still is) mostly served cafeteria-style, where you point to the items that you want. Unfortunately, due to all of the curry sauce covering the solid ingredients and a language barrier with some of the employees, I once accidentally got a potato curry. Did I mention that I really dislike potatoes? My friends had a good laugh over it (I'll admit, it was pretty funny, as I slowly realized what it was during my first bite), but I was none too happy about that. Since then, the restaurant has added several meat options, and, in general, those are better. The restaurant tends to use too much turmeric with its vegetables, but is better job with the meat.

Price-wise, you really can't beat it. Lunch -- and a huge portion (it would be a two-day lunch for me) -- is like $5. So, if you're waiting for your next paycheck and are about to resort to McDonald's, then try this place instead. (There is a $10 credit card minimum though, so bring cash.)

I made my annual visit to check out this place right before Diwali 2010. I figured it would be an affordable and convenient place to buy some sweets to share with my coworkers in honor of the happy occasion. 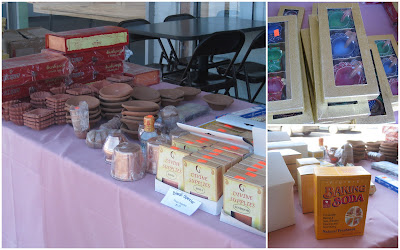 Out front, the restaurant had a festive temporary Diwali display. There were various religious and cultural items for sale, including sindoor (vermilion) and pretty candle holders. But there was also baking soda. We hoped that wasn't for if you accidentally set your house on fire with Diwali candles. 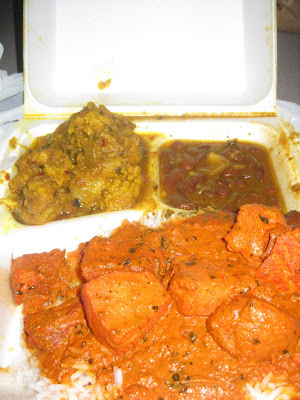 For lunch, I got a combo plate. For my meat, I picked Chicken Tikka Masala. The chicken was a little tough and the sauce wasn't sweet enough. For one of my veg sides, I got the cauliflower. It was a little spicy, but that was OK. For my second vegetable, I got the beans, which I thought the best of the three items I choose. FYI: My friend Melanie says that on days when the okra dish is available to definitely get that; she says it's delicious. 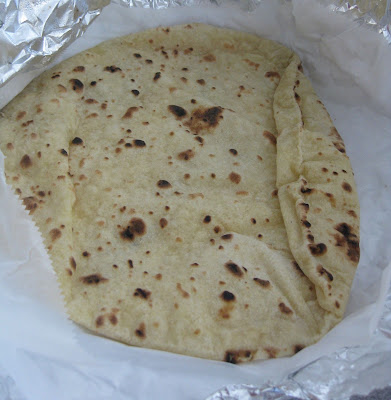 The lunch combo comes with white rice (which is put on your plate first, then you choose which dish you'd like poured over it) and Chapati (shown here), an unleavened Indian bread. I'm pretty sure you can upgrade to other kinds of bread, like naan. 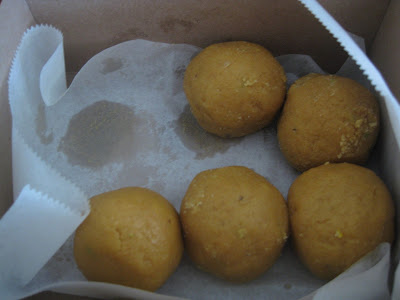 For a sharable fresh sweet, I bought some Besan Ladoo, which is a round dessert made with gram flour. This was really yummy. It was flaky and has a taste similar to peanut butter. (It's pay per pound for the fresh sweets.) I also bought some packaged shelf-shable sweets to share: Haldiram's Karachi Halwa ($8.99) and Bikano's Soan Cake ($4.99). Each contained 12 individually wrapped pieces.

Seating here is limited at at communal tables, so as usual we took our food back to the office. (The tables are generally full of Indian patrons, which is a testament to the restaurant. I'm just not sure if it's a testament to the food or to the prices.)

For a place that has a lot of to-go customers, the packaging really needs to be improved. (As I'm mentioned previously it's one of my pet peeves when curry dishes are put in flat containers that spill, instead of in bowl-shaped ones.)

One neat thing her is that the restaurant does contain a mini-Indian grocery store. That's definitely a nice added convenience. This time, I bought chaat masala. They sell other spices/spice blends, daal, and I've heard the elusive Indian cola Thums Up is available (though it wasn't in the visible refrigerated case).