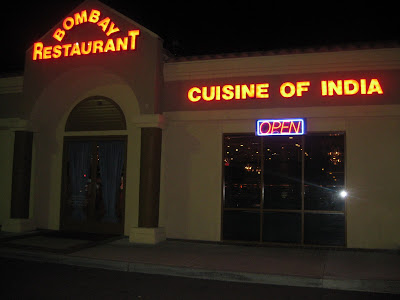 Bombay Restaurant Cuisine of India serves up a solid (if a bit too spicy, in some cases) rendition of Indian food in weekend getaway San Bernardino County.

The Details: On the drive back from a Lake Arrowhead day trip, Nick and I realized it was the perfect chance to try out another Indian restaurant in San Bernardino County. The county is a short drive from where we live in Los Angeles County, but it always feels a world away. San Bernardino is the largest county in the lower 48 states by area, but its population is so sparse for its size. Compare that to L.A. County, where I can literally tell what song my neighbor is listening to on her iTunes. (Pat Benatar, again? Really?) It's a nice county for a weekend escape.

We took a quick detour off of the freeway to Bombay Restaurant Cuisine of India (whew, the name itself is a mouthful). Unlike in L.A. County, parking here is not a problem. The Indian restaurant shares a private lot with several other businesses. Inside, the decor was nothing special. It has a traditional red and gold color scheme, some Indian music playing, no real artwork, and some traditional light fixtures that look a little out of place. 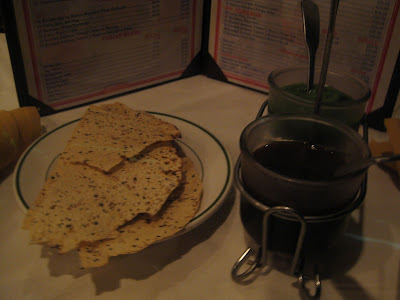 The complimentary papadum was too spicy for us to finish. Bummer that the spice gene seems to have skipped my generation in my family. I wonder if my little nephew can handle it. This papadum is not for the faint of heart. 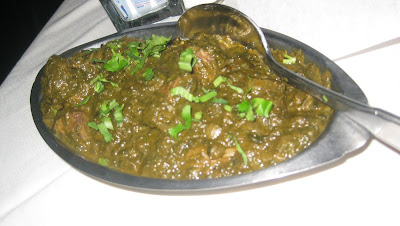 Since we were given a choice of spice levels for our entrees, both Nick and I picked mild. Nick got the Lamb Palak, diced lamb cooked with spinach and ginger garlic. 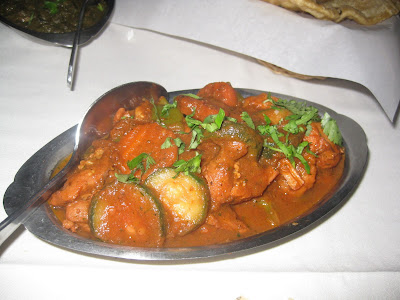 Always on the hunt for vegetables, I got the Chicken Jalfrezi, which was described on the menu as tender chicken pieces cooked in fresh vegetables, ground herbs, and spices. I was happy to see the dish featured an assortment of veggies including zucchini, carrots, and cauliflower. 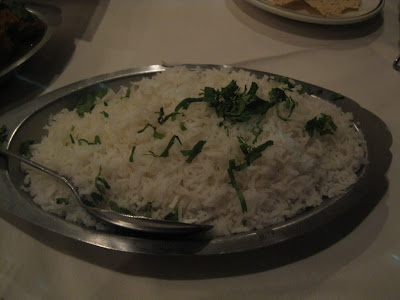 We got a side order of Basmati Boiled Rice, which was $3.95. All entree selections are served a la carte, though there are a wide variety of rices, breads, and other extras (pickles, chutney, raita, etc.) that can be added. There are about four options for complete combo meals that include rice, naan, and other extras; those start at $17.95 per person and are available for dine-in only. 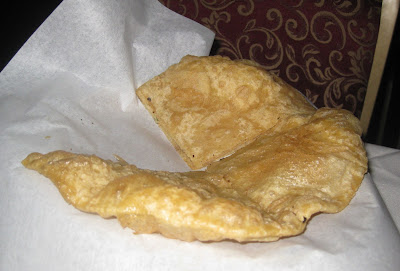 Nick of course was ecstatic to see that his favorite (and somewhat elusive) Indian bread -- poori -- was available. However, he was none too thrilled to discover that it was made from whole wheat (not white) here and tasted of it. "I'd rather they not messed with it," he said. Truth be told, poori is often made with wheat flour, but something was  definitely off with the restaurant's recipe as the bread was not all fun and poofy as it should be.

All in all, Bombay Restaurant is fine but nothing spectacular. The food tastes traditional, like something my mom would make at home for the family, but not at home for company -- if that makes sense. It doesn't have the richness that's typical of Indian restaurant food.

The service was good; we didn't have any problems with our order. The restaurant was mostly empty, but it was a random Monday night. On our way out, our server handed us some coupons, which was a nice gesture. You can also print out coupons from the restaurant's website.

What's your favorite Indian restaurant in the Inland Empire?