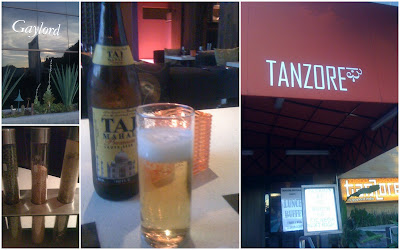 If you're having a high-end Indian wedding (with an equally high-end budget), you could actually get married here. Adjacent sister venue Gaylord offers several banquet rooms. The Lotus Room holds 200 guests, the Haveli Room, 35 guests; Tanzore's own lounge can be rented out for up to 80 guests; or rent out the whole place, which can hold up to 450 guests (though this still might not be enough space for the typical Indian wedding -- unbelievable but true!).

Tanzore has been around in this incarnation since July 2007. Before that, it was Gaylord India Restaurant, one of the outposts for the Gaylord India restaurant chain that's headquartered in New Delhi, India, and that has several locations throughout India. (Gaylord still has several international locations, in cities like London and Hong Kong.) When the Beverly Hills location changed to Tanzore, it kept select menu items from Gaylord.

Not really being a high-end couple, Nick and I classify Tanzore in the "special occasion" category of restaurants. In fall 2010, we got seats at its annual Diwali Red Carpet Event. This event is an almost-weeklong annual celebration at Tanzore, and the Friday and Saturday events sell out every year. (The full Saturday event includes a 3-course dinner, live DJ and dancing, henna artist, fashion show, exhibition booths, Bollywood dancers, and club night.) Nick had a conflict for the weekend events, so we went on Thursday night, which was the 3-course dinner, plus a live Indian flute player and a henna artist.

We were asked if we wanted the veg or non-veg option, and both of us picked non-veg. Before I show the food photos, I have to knock a few Peppers off of my PHOTOS. My camera decided to give me a 3-photo warning before it died. (Thanks, Canon -- how about a 30-photo warning next time!) Nick saved the day with his iPhone -- but I am sad you can't get the full effect of the gorgeous presentation, including the arty-shaped white plates. (Note to self: Charge camera on a regular basis, with or without the warning light.) 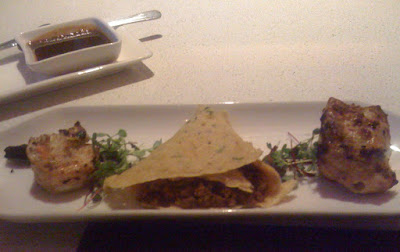 The first course was a sampler trio of Tandoori Shrimp Kalimirch, Achari Chicken Tikka, and Lamb Stuffed Besan Chilla. The shrimp (left) was delicious. The chicken (right) was a little dry, but I liked it despite that. The lamb (center) was a little spicy, but in a good way. (The veg option would have been a trio of Paneer Methi Shashlik, Vegetable and Corn Fritters, and Upma Medallion.) 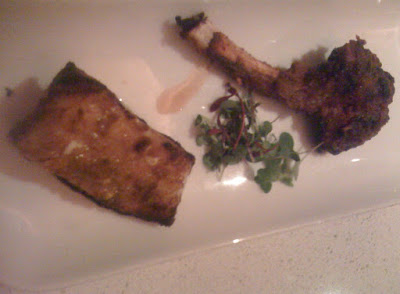 For the second course, I thought we'd have to choose between the three items, but, as it turned out, we each got all three! I liked the Tandoori Chillean Seabass (left) best of of the three. Also on this plate was an Adraki Lamp Chop, which I thought was just OK. It was gritty with spice. 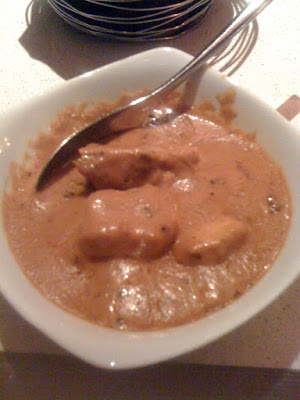 Nick liked the Chicken Tikka Masala the best. I liked it a lot too. The sauce was yummy, and it had a unique background flavor that I couldn't quite place. This was served in the largest portion of the three, and I was too full to finish mine. The server said she'd put it in a to-go container, but then a kitchen employee accidentally threw it away. So, the server arranged for the chef to make me a fresh mini-batch of it to take home. This was a very sweet gesture that sent me home with a good feeling about the restaurant. (The veg main course would have been Okra Do-Pyaza, Spinach Kofta in Spinach Shorba, and Paneer Makhni.) 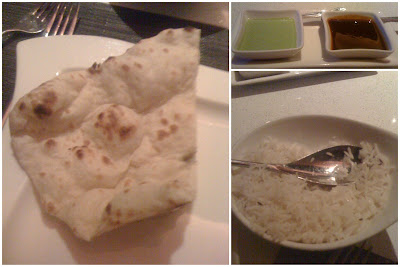 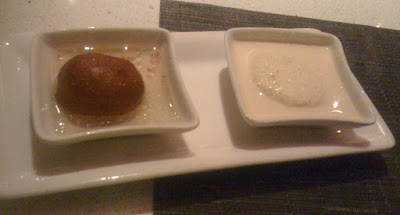 For dessert, we did each have to make a choice: between the duo of Indian desserts of Gulab Jamon and RasMalai or a Fresh Fruit Tart. Luckily, we each wanted a different one so I got a bite of both options. The RasMalai (right; paneer soaked and served in cream with cardamom flavoring) was so amazing. It was cold and the flavor was so terrific. I've had a lot of mediocre RasMalai, but, wow, when it's done perfectly it may actually oust kulfi (Indian ice cream) as my favorite Indian dessert. The Gulab Jamon (left; a deep-fried ball of milk solids) was served warm, but it was just too sweet to be my style. 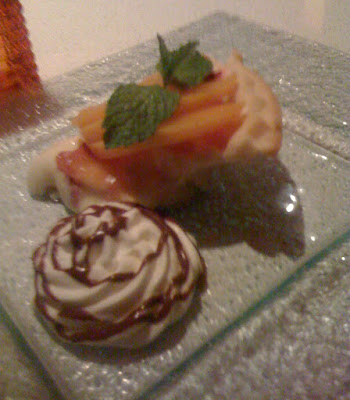 Nick's fruit tart was nice and fresh, garnished with a sprig of mint and some cream on the side.

Drinks were an additional cost. Nick got a Taj Mahal beer. A nice thing about Tanzore is that, unlike most Indian restaurants, it actually has an extensive wine list.

My other issues with Tanzore are the host stand situation and the parking. The host at the host stand was on the phone both times we tried to talk to him (originally to be seated, then to ask if Tanzore validated parking). A server wound up having to seat us. I'm sure the host was busy taking other reservations, but it just seems like if taking reservations is his role, he shouldn't be placed at the front stand where real-life patrons are walking in and out and might need assistance. For parking, plan to pay -- either at a meter on the street (I think the Beverly Hills meters take credit cards, which is at least a plus), or park in the adjacent garage for $2.50 for lunch or $4.50 for dinner. Later in the evening and on popular nights, paid valet parking is also available. We didn't get any discount on our parking for dinner and we both had to take separate cars (we both came from work), so it was aggravating to spend $9 on parking when we'd just spent over $50 each on dinner.

Tanzore is definitely one of the premiere special occasion restaurants in Southern California. It hosts all kinds of other cool events throughout the year (Halloween parties, New Year's Eve parties, etc.), so join its mailing list here to stay in the know.