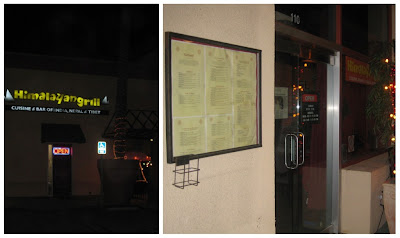 Focusing mostly on Indian cuisine (with a few Nepalese and Tibetan options), the food at this serene Huntington Beach restaurant is delicious.

The Details: Himalayan Grill enveloped me in a sense of calm. I'm not sure whether it was the water feature at the entry, the hanging Tibetan prayer flags, or the soothing music playing in the background, but I was thankful to eat here after an especially hectic day. Also calming was the fact that, perhaps courtesy of the fact that the restaurant is in Orange County, there's actually ample free parking. On this Monday night, Nick and I met up with two friends, Kiair and Neena, for dinner.

The restaurant bills itself as having food from India, Nepal, and Tibet, but the vast majority of dishes are from India. Only six entrees (all noodle dishes) are classified as Tibetan/Nepalese on the menu. If you're looking for a place that has more dishes from Nepal and Tibet, then I'd recommend Tibet Nepal House in Pasadena instead. But if you're looking for delicious Indian food, this is definitely your place. 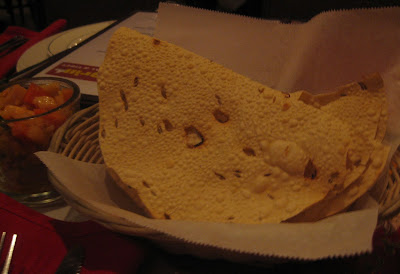 The free Papadum came with a mango chutney, which is a nice upgrade from the usual mint or tamarind sauces. 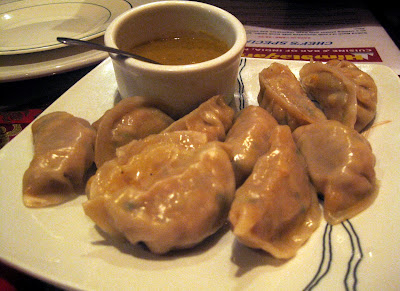 There is one Nepalese appetizer available and, lucky for Nick, it is his favorite: Meat Momos. These are steamed dumplings filled with ground chicken and mixed vegetables. They were yummy but I must warn you, they had a kick. These momos are spicier than they usually would be at other restaurants. 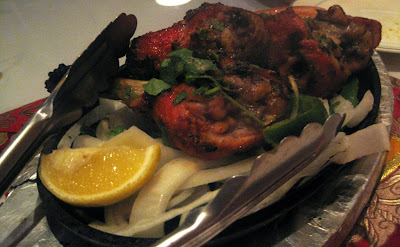 Entrees here are served family style, and the four of us shared them. First out was the Tandoori Chicken, which was literally sizzling. As I've mentioned before, I use tandoori chicken as a barometer for Indian restaurants, and in this case, the meat was perfectly juicy. My only critique would be that I could have done without all the cilantro. Neena said she could have done without so much salt. 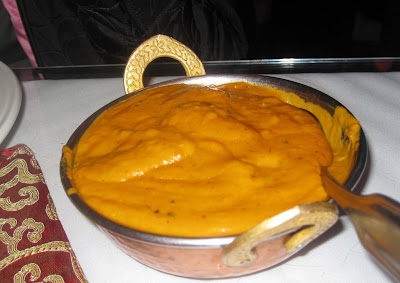 Nirvana Chicken is my exciting new Indian food discovery. (Maybe it's weird that I'm still discovering new Indian dishes after 28 years? Still, I am thankful for this find.) It reminds us of chicken tikka masala, but with coconut flavor. It's described on the menu as as boneless chicken tikka marinated in spice and yogurt and cooked with coconut and cream sauce. Everyone loves this sauce. 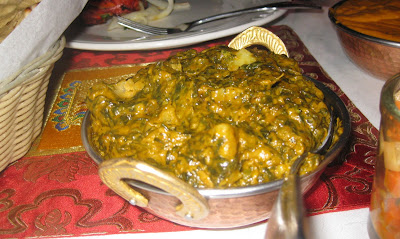 Of course, I love virtually anything with saag (spinach), the blog's namesake, and the Saag Aloo at Himalayan Grill was no exception. To be honest, I'm not usually a fan of the aloo (potato) part, but this dish was truly delicious. There was some unique spice in the background that we couldn't quite place, but my best guess is cinnamon 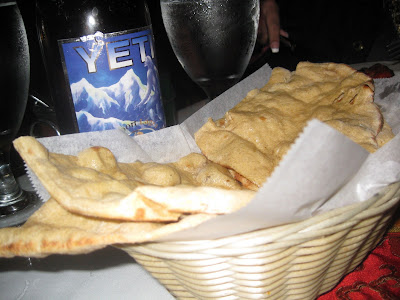 Neena and I were both excited to find that the Tandoori Roti, a bread baked in the tandoor oven, was made with whole wheat flour. Yay for a bit of a healthy twist! (You can also see Nick's Yeti beer in the background of this shot, always a great accompaniment to a South Asian meal.) 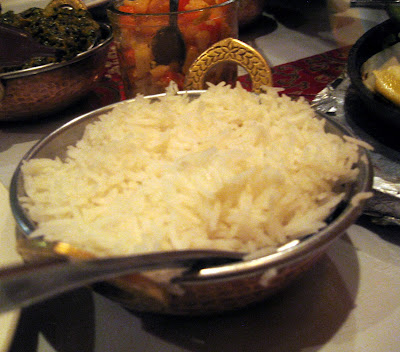 Rice had to be ordered separately, so we ordered the staple Basmati Rice to share. It's $2.95. The restaurant also offers biryanis (saffron-flavored rice dishes that have bits of veggies and/or meat or seafood thrown in; it's like the Indian answer to Chinese fried rice), starting at $11.95.

All in all, the food here is exceptionally great. Nick and I had gone here once before about two years ago, before I had this blog, and the food this time was even better than I remembered. I took off a pepper for the service (slow) and because the bathroom is far (aggravating -- it's a shared bathroom with neighboring businesses, so you have to leave the restaurant to wash your hands). Oh, and according to the restaurant's website, there's another branch of this restaurant -- in Flagstaff, Ariz. So, if you somehow found this blog and you're in Flagstaff, please do leave a comment below to let us know if the Arizona restaurant is just as good!

What's your favorite restaurant for Nepalese and Tibetan food?