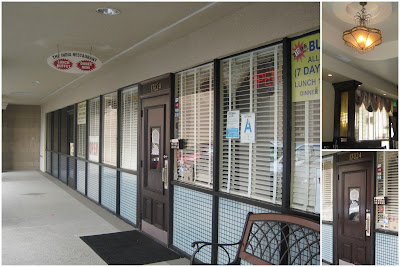 My personal go-to Indian restaurant, I give The India Restaurant my highest recommendation.


The Details: Conversations about The India Restaurant generally start like this.

Them: "You're Indian, right? [sometimes that part is internal] What Indian restaurant do you recommend?"
Me: "The India Restaurant on Pioneer Boulevard in Artesia."
Them: "OK, great. But what's the name of it?
Me: "It's called 'The India Restaurant.'"
Them: "What? Can you spell that?"

Yes, friends, the restaurant is literally called "The India Restaurant." No "Bombay" this or "Tandoori" that. Just direct and to the point. Imagine if only everything could be named so simply. What would all the pretentious snobs do with themselves?

If I were to suggest a name change for this place, I'd recommend that it be referred to as THE India Restaurant, because, it is THE place to go to for Indian food.

I've given out 10 Peppers before, and I hope to again, but this restaurant holds a special place in my heart because it was the first Indian restaurant where I ate upon moving to Los Angeles five years ago. I went on a friend's recommendation, and since then I've shared the recommendation with many other friends. I've yet to meet someone who doesn't love the food. I generally make it a point to try out new restaurants as often as possible, but when I'm in Artesia this really is my go-to. Don't get me wrong--there are lots of great restaurants in L.A.'s de facto Little India, and I do encourage you to venture out. But if you haven't been here yet, don't wait any longer.

On this particular day, it was lunchtime -- so the best choice then is definitely the lunch buffet. 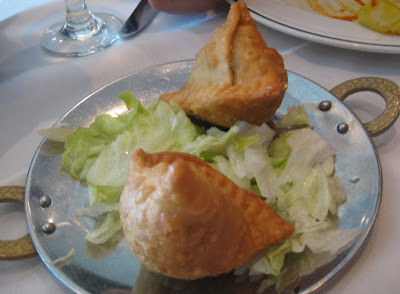 But before the buffet, Nick really wanted Keema Samosas. There are appetizers on the buffet, but no samosas. I like these, but I think the buffet ($10.95 a person) holds its own without them. Nick, however, orders keema samosas pretty much everywhere we go. It's all good though. These are yummy. 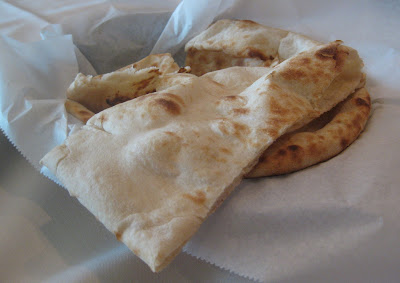 Fresh naan is brought to the table. 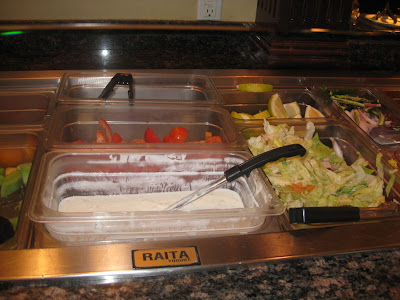 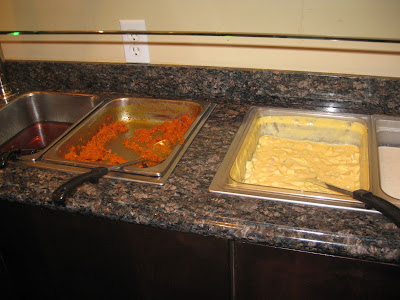 The buffet includes a simple salad bar, some fruit options, about 12 entrees, and 4 desserts. 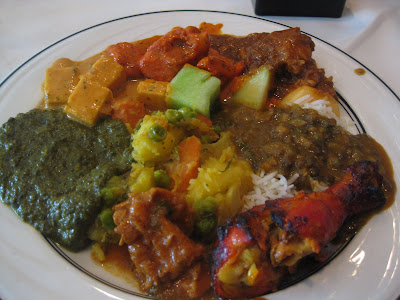 The meat entrees are disproportionally chicken, which is a bit of a bummer, but at least they are all delicious (including Tandoori Chicken, Chicken Curry, and Chicken Makni). This particular day they also had a lamb entree, though some days they switch that out with fish. There were about 5 vegetarian entree options. There are also pakoras, rice, and daal. 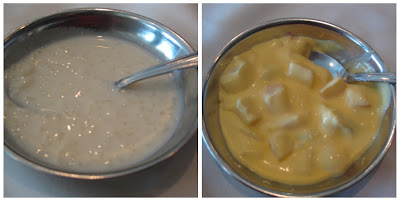 On this day, I sampled two of the desserts (I feel so guilty writing that). The Kheer (left) is a delicious rice pudding. The Fruit Cream (right) had a delicious cream, but the fruit tasted like it was from a can. My real favorite dessert here is the Carrot Pudding. I love it. It was on the buffet that day, but it's just so rich that I wasn't in the mood for it. (Plus, typing "I sampled three desserts" would really be humiliating for me.)

The first time I went to The India Restaurant I went for dinner, for which they don't offer a buffet. I honestly don't remember what I ordered that first time, but one of their dinner entrees from separate visit does stick in my head. The Mushroom Masala. That masala sauce was lick-the-plate good. Even Nick, who is usually disappointed when I order a vegetarian entree for sharing, admitted that this dish was excellent.

Service here is generally good. I've never had a problem. There is sometimes a wait for a table. One time, there was a disgusting toilet issue in the bathroom, but I let an employee know and I'm pretty sure that was a one-time problem.

Parking is free. The restaurant shares the Ziba parking lot (there are spaces both in the front and the back of the building), plus the street parking is free (at least for 2 hours, I believe).

Have you been to The India Restaurant? Do you love it as much as I do?