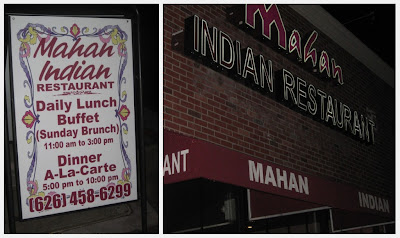 Similar to the downtown region it's in, it's hit-and-miss at Mahan -- though, if you're in the area, I'd feel comfortable recommending it for the occasional Indian dinner.


The Details: Nick and his brother Bobby have regular dinners together every Sunday. Sometimes when I'm in Pasadena for the day I'm invited along. I imagine it's quite the change of pace for them -- instead of talking about sports and current events, they get to hear me babble on about food and whatever else I babble on about (sometimes I'm not even sure). On the plus side, whereas Nick and Bobby are both creatures of habit and eat at the same five or so restaurants every week, I occasionally inspire them to venture out. Both seem to get a kick out of helping me with my Indian restaurant reviews, so this particular Sunday it was Bobby who suggested we go to neighboring Alhambra to check out Mahan Indian Restaurant.

Inside Mahan, Indian music was playing, large framed Indian wall hangings were on the wall as focal points, and nice chandeliers (that didn't weren't Indian-themed though) hung from the ceiling. 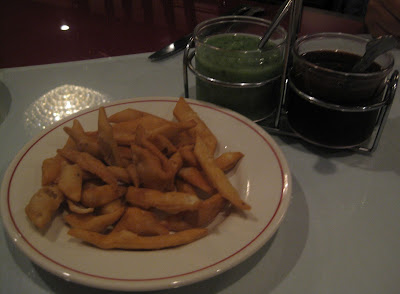 Instead of the usual free papadum (it's 2 pieces for $1 here), the restaurant offers something that I can best liken to Indian French fries. This is the first time I've seen this appetizer. The server called it something that sounded like "Marty" but I may have that spelled totally wrong. (If you know what it is, feel free to leave me a comment.) They tasted like they were made of besan (chickpea flour). They were quite good, and it was a cool change from the typical papadum. 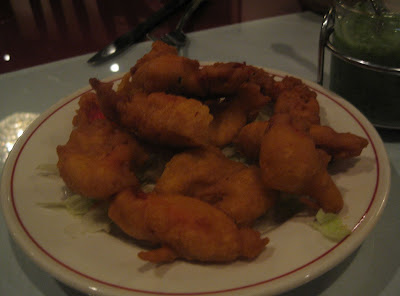 Service was definitely on the slow side (though weirdly the server was on top of refilling our water glasses, so maybe they were having some sort of kitchen issue), so much so that we'd forgotten we'd ordered Chicken Pakoras by the time this appetizer arrived. These were yummy, though a little too spicy. It made me think of an Indian take on popcorn chicken. 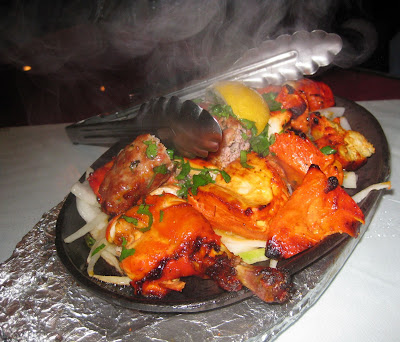 When our Mahan Mixed Grill came out, wow, it was seriously sizzling. My camera even captured the sizzle coming off of this dish. It included chicken tikka, tandoori chicken, and lamb sheekh kabob. The only bummer was the other items in our order didn't come out for quite a while afterwards. 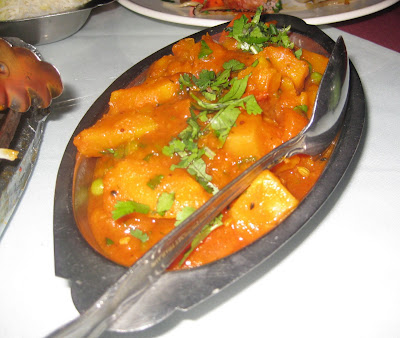 Nick wanted nothing to do with the Pumpkin Curry on the menu, but he was outvoted by Bobby and me. I.love.pumpkin. I love concocting savory pumpkin dishes like pumpkin enchiladas, mixing pumpkin puree with instant vanilla pudding and pumpkin pie spice to make an oh-so-easy dessert, and, not to forget, baking my Chai Spiced Pumpkin Pie. Unfortunately, this pumpkin curry was an ingenious idea that was poorly executed. It didn't even taste like pumpkin. It tasted like potatoes, which it had way too many of. The only tip off that it even contained pumpkin was the orange-tinge. This experience made me decide that I'm going to come up with my own pumpkin curry recipe (stay tuned). 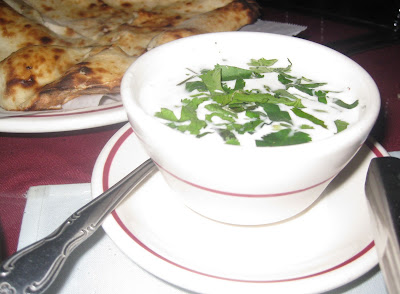 I'm not a big Raita person. It's an Indian style yogurt, but it's typically too sour for my taste. Mahan's was refreshing. I still wouldn't personally order it, but if you're a raita fan, go for it. Bobby loves raita and felt the yogurt was good but would have preferred thicker cucumber pieces. 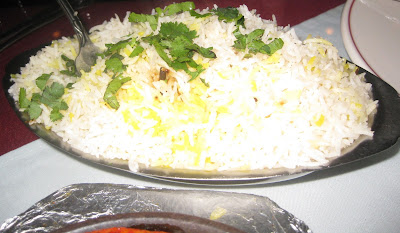 The rice here was better than usual. It had great flavor -- saffron perhaps?