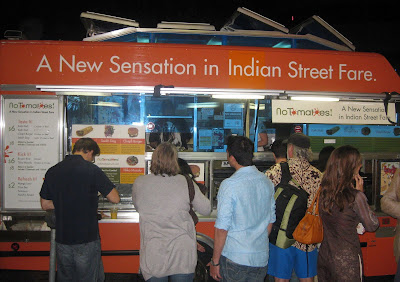 This roving restaurant has affordable Indian street fare, with some being worthy food options and some definitely not. Oh, and it DOES serve tomatoes.

The Details: It irks me that the No Tomatoes! Indian street fare food truck serves food that has tomatoes. Why the misnomer, guys? No Tomatoes! should take a page out of the menu of The India Restaurant and just name itself what it is (No Tomatoes: Just Kidding?). For you tomato-haters out there who were considering flocking to this truck, you're actually safe except for the tikka masala.

Name notwithstanding, I love the growing Indian food truck trend. Gotta love that entrepreneurial spirit and adaptability. Service at this truck s friendly, moreso than at some of the other ones. The food was served quickly, literally less than a minute after we ordered. The only aggravating thing customer service-wise is it charges $0.50 extra for credit card payments. I had enough cash on me but didn't want to juggle with the change, so I paid with a credit card anyway. Boo to losing some laundry money.

Like most food trucks, it has a limited menu, and it's affordable. Prices range from $2 (drinks) to $6 (most items) to $8 (combos). Portions are small though, especially the samosas. 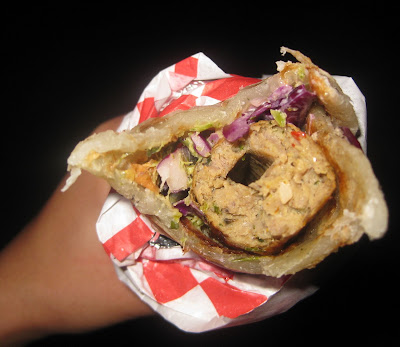 I got the Seekh Dog with lamb (also available with chicken or beef). which is meat wrapped in paratha and topped with coleslaw, red onions, cilantro, and mint chutney. I appreciated the crunch of the vegetables. This item was spicier than I expected it to be, but I'd still recommend it. The inner paper wrapping was frustrating though. I was so hungry and the paper wouldn't roll down! At one point, I was seriously considering biting into the paper--ha! 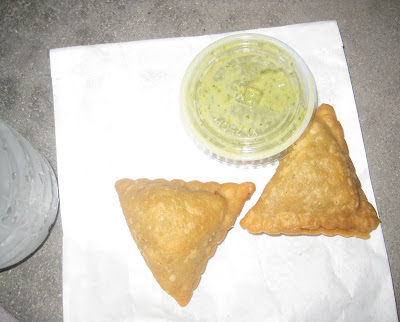 I paid $2 extra for the combo, which included two small Samosas and a drink (either a bottled water, which I got, or a soda. If you want an Indian drink, like a Mango Lassi or a Chai Tea, that's $2 on its own). The dipping sauce that comes with the samosas is a nice truck. 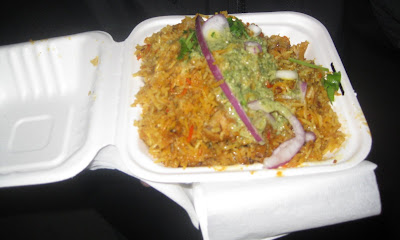 Now the main reason this food truck lost so many peppers in its rating. The biryani was wayyy too spicy! I mean, it was basically inedible. Nick bought this for $6, and I noticed he kept grabbing my water bottle after every bite. I asked him what was wrong. He let me taste it, and I knew we'd have to throw it away. It was so spicy -- wow. Trying my best to overlook that, the rest of the flavors taste-wise were fine, but smell-wise it had an odd, unplaceable smell. It came with chicken (no choice with the meat), though the chicken pieces were really small. I gave Nick one of my samosas, and sadly that was pretty much his dinner for the night. The line for the food truck was too long for me to be able to let them know about the biryani problem or to find out if we could replace it with something else. Bummer.

What's your favorite Indian food truck? Have you eaten No Tomatoes! biryani and did you have the same spice level issue?

No Tomatoes!, location varies.
Posted by Sree at 8:09 AM