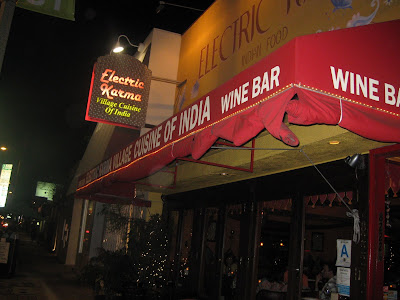 9 out of 10 Peppers = Extra Spicy
The Details: As we walked into Electric Karma, Nick commented, "This is the best smelling Indian restaurant I've ever been in." The great ambiance wasn't limited to just the smell. The restaurant interior is designed to look like a home interior, full of colorful murals, artsy tablecloths, and Indian chotskies. Outside, there's a patio with low-lying tables (you sit on pillows on the floor) that's good for groups. We sat inside, where there were Bollywood music videos playing at just the right volume.

When I saw the menu, I instantly loved the creativity. Even if it doesn't exactly turn out right, I always give props to a creative chef or mixologist. The cocktail menu at Electric Karma includes a Mango Martini, Indian Sangria, and an Indian Mojito (which the server confided isn't really Indian-influenced, though those other two drinks are.) 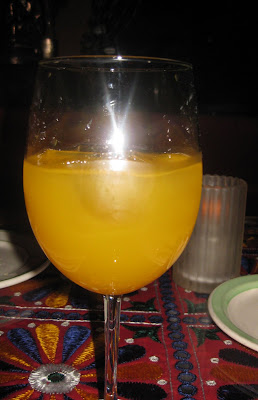 I got the Indian Sangria, which was mango juice and white wine. It was OK at first, but after the first few sips it tasted medicinal. It would taste better with better wine and with some fruit in the glass (mango chunks, in this case), like a typical sangria. Still, I'm thankful for the inspiration, as it's a good starting point to come up with my own Indian-inspired sangria drink at home. Next time I'm at Electric Karma though, I'll get a different beverage. 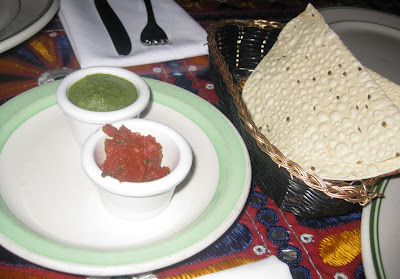 We got complimentary Papadam, which came with two chutneys. It was fine, but the appetizer and main course is where Electric Karma truly shines. 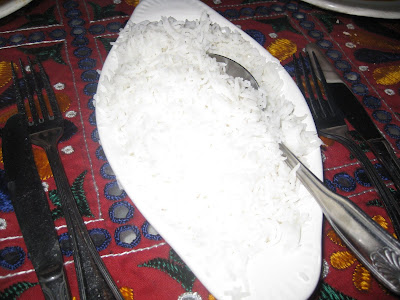 Nick and I frequently debate on white v. brown rice, and Nick won out with the white this time, as the server sided with him. C'est la vie. 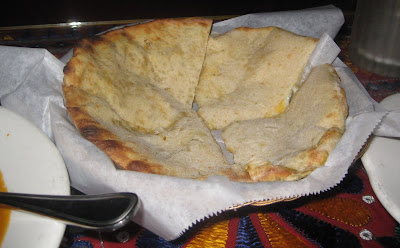 We both agreed on the Cheese Naan order. This was such good cheese naan too. It tasted like an Indian grilled cheese. I just love how mozzarella gets all stringy when it melts. 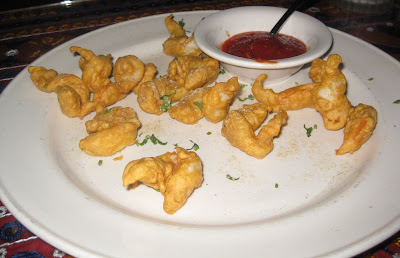 Nick wanted Shrimp Pakoras. I don't usually like pakoras as they're usually just balls of fried batter, but these pakoras were excellent. They had just the right amount of batter to where I could still taste the delicious shrimp. It made me think that this is what popcorn shrimp would taste like if it was an Indian dish. It's weird that I keep comparing the menu here to an American fast-food menu, what with "grilled cheese" and "popcorn shrimp," but doing these items well really makes Indian food accessible to a larger audience. (Plus, I live in walking distance of not one, but two, Jack-in-the-Boxes, so sadly I become too familiar with their menu about once a month when I don't have time to get to the grocery store. I mean, Jack-in-the-Box grilled cheese works in a pinch, I'm not gonna lie, but it's miles off the pace of the cheese naan at Electric Karma.) 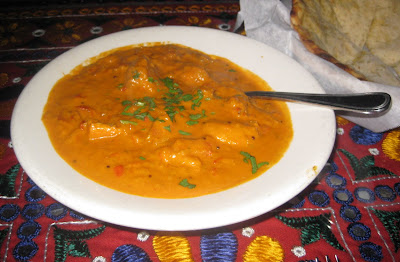 I've seen Nirvana Chicken on Indian restaurant menus occasionally, but I'd never ordered it. I've definitely been missing out. I could eat this chili-coconut sauce all day! The restaurant menu describes this dish as grilled chicken in a coconut masala curry with chili, and I'd add that it's a must-try. 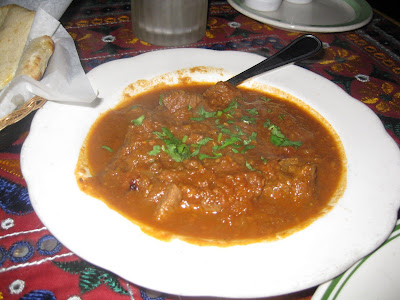 We also ordered the Lamb Curry. This was a solid curry dish. It was a more traditional Indian preparation than the other dishes.

We got good service, and I'd have this place as a borderline 10 Pepper restaurant, except I'm a stickler for free restaurant parking. So Nick and I actually only had to pay like a quarter to park, because the meters stop being enforced at 8 p.m. and we showed up at 7:45 p.m. on a Sunday so there was plenty of parking that was about to be free. But normally (on Friday and Saturday nights, at least), you'll need to pay for valet. I noticed that the meters (which do take credit cards, which is nice) only let you park for two hours, so I question if that's long enough for dinner, especially with a big group.

All in all, a really great experience and I'd love to go back. Oh, and a cute touch is on the way out we got an Electric Karma music CD -- I guess it's mixes they play in the restaurant? I'm not really sure as I popped it in my computer once and it was all techno, so I wasn't paying much attention. But it's a cute little party favor.