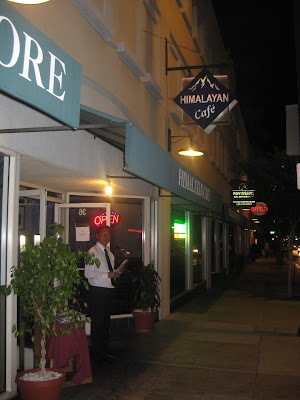 Old Town Pasadena now has a second Nepalese-Tibetan restaurant in its midst. Newbie Himalayan Cafe is worth a visit, but not quite as good as established Tibet Nepal House.

The Details: I felt a little bit like I was cheating on Tibet Nepal House when Nick and I decided to check out the new Nepalese-Indian restaurant on the block. Newly opened in Old Town Pasadena (less than half a mile from Tibet Nepal House), Himalayan Cafe is a second Pasadena option for tasty Nepalese, Tibetan, and Indian cuisine.

It was near impossible for me to not compare the two restaurants, and Tibet Nepal House is better, hands-down, on virtually all counts, from food quality to decor to parking. (Himalayan Cafe doesn't validate anywhere; however, it is right next door to the School House public parking structure that offers free parking for your first 90 minutes.) But Himalayan Cafe is a worthy restaurant, so if the city is able to support two restaurants in the same niche (not to mention the four or so other Indian restaurants in Old Town!), then more power to it.

At the door, a friendly employee was passing out fliers and really working it to get people inside. Nick was already seated, so I didn't have to be convinced, but I stopped to talk to the employee for a minute anyway. Once inside, I saw that it was fairly busy on this Saturday night, but not as busy as Tibet Nepal House tends to be (though that could just be because Himalayan Cafe is new). The decor is OK. It has some South Asian-themed wall hangings and wood carvings, but the look isn't cohesive.

We were seated at a table by the kitchen doors, which I would not recommend because the smoke caused me to cough intermittently throughout the meal. The server was too aggressive when taking our order. He repeatedly kept trying to get us to add extra stuff to our order that we didn't want. Plus, the extra Nick did want -- Aloo Achar -- he informed us the restaurant was out of. Bummer! 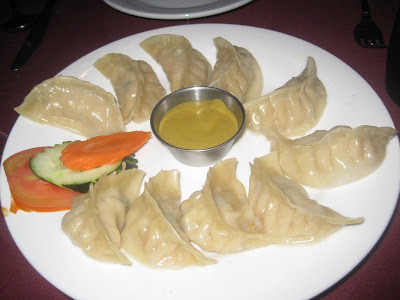 Luckily, the kitchen had Chicken Momos, a Nepalese dumpling that's a perennial favorite. These were yummy. I don't think I've ever had a bad momo, come to think of it (is "momo" the singular of "momos"? that sounds so odd), and these were certainly as good as any others I've had. 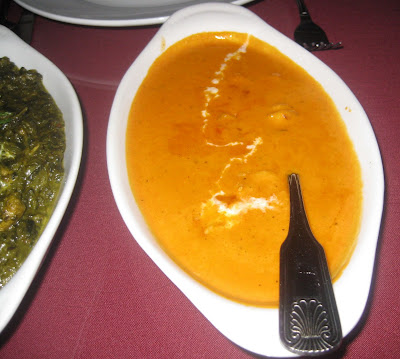 Nick wanted to try to Shrimp Masala, described at tandoor-baked fresh tiger shrimp served in cream sauce with Himalayan spices. It was a nice sweet sauce. The shrimp pieces were smaller than I expected, but Nick said he liked the size of them for their texture. 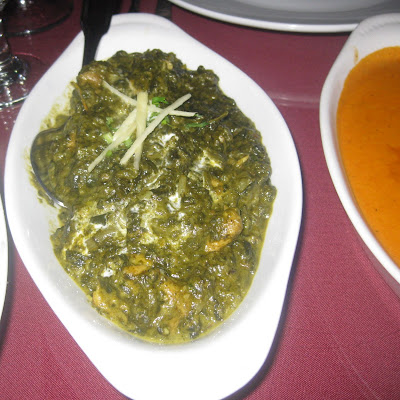 Of course, I took it upon myself to order us something with vegetables, so I opted for the Chicken Saag, described as boneless chicken and garden fresh spinach with Himalayan spices. Nick didn't like the chicken, saying he thought it tasted "cheap," but I thought the chicken was perfectly tender. I did think the spinach needed more flavor. 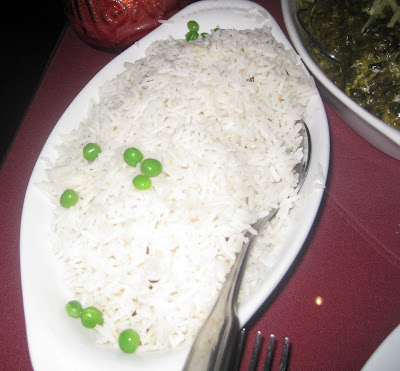 The restaurant has a pretty extensive rice and breads section, including six different kinds of naan. We were in the mood for just plain Basmati Bhat (plain basmati steamed rice with a few peas), which is $2.99 and was enough to share.

So, we don't have a new favorite go-to Nepalese restaurant, but I would eat here again. I feel like for every three or four times we eat at Tibet Nepal House (where we go probably more often than any other restaurant; it may be tied with Domenicos in Long Beach, an Italian restaurant with an amazing ground pepperoni pizza, as our go-to restaurant for when we want guaranteed good food) we'd go to Himalayan Cafe once.

Have you been to Himalayan Cafe yet? What did you think of it? Have you tried the buffet? I'm definitely curious about that.