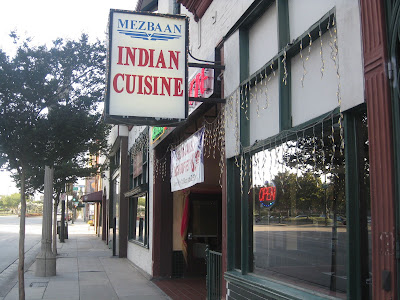 Go for the extensive alcohol menu (including 7 Indian beers!) and stay for the tasty Indian cuisine at Mezbaan in Old Town Pasadena.

Old Town Pasadena is a sweet place to experience South Asian food. In just a few blocks, there are at least five Indian and/or Nepalese restaurants, including the new Himalayan Cafe and our perennial favorite Tibet Nepal House. Each has its own niche. For Mezbaan, its the alcohol. It has its own Maikhana Beer & Wine Lounge, which has some great beer and wine specials. On Mondays and Thursdays, there are $2 drink specials. I was impressed that the restaurant carries seven different Indian beers.We went on a weekend, so unfortunately, we didn't get any special drink prices (I think those are only in the lounge anyway), but Nick did try one of the crazy drink offerings.

The main restaurant is pretty standard when it comes to decor -- nothing special. There are some framed Indian-styled fabric pieces on the walls. There's also a lengha (the Indian outfit that's the fitted blouse with the long embellished shirt) on the wall, which I thought was cool but Nick thought looked like a cheap attempt at decor. The restaurant uses metal glasses for water, which felt authentic since everyone in India seems to drink out of metal glasses, and custom-labeled plates that say "Mezbaan".

The wine bar is a semi-private area that holds about 60 people. There's also a patio, which the night we were there was holding a wedding reception. 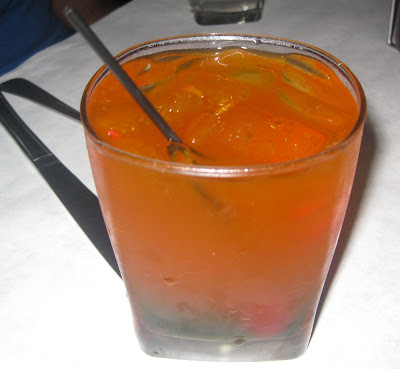 Let's actually talk more about those drinks first. Nick ordered an intriguing concoction called the "Whatever." Description? "An undisclosed mix of alcohol and juices." Our best guess: rum and ginger ale? Whatever it was, Nick said it was "mad strong." It tasted pretty good, but Nick didn't finish it. 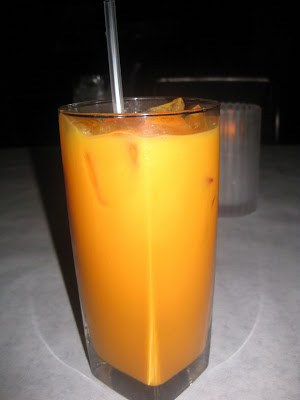 I ordered a (non-alcoholic) mango lassi. When our server brought it to the table, I thought she got my order mixed up because the drink looked more like mango juice than like a lassi. It was thin and had ice in it. The server said this was indeed Mezbaan's version of a lassi, adding that it was Americanized. She offered to remix it with more yogurt to make it thicker, but it was refreshing as it was so I kept it. 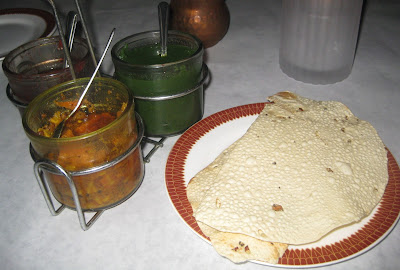 The papadum was free. It was your standard papadum. Most foods are yummy when they're free :) 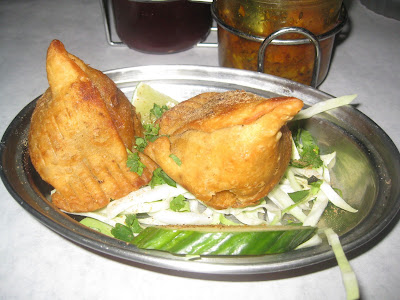 We got an order of Keema Samosa's, one of Nick's faves. It came with two fairly large samosas. They were deliciously hot and fresh. 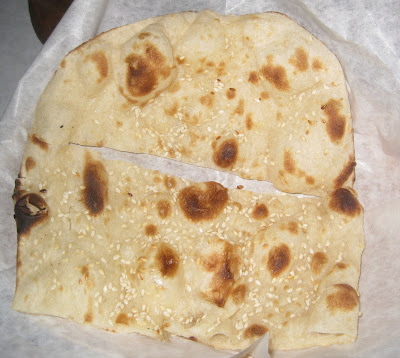 We wound up ordering two orders of sesame naan. Normally one is enough for us to share, but both of our dishes had a lot of gravy this time, so two was the way to go. 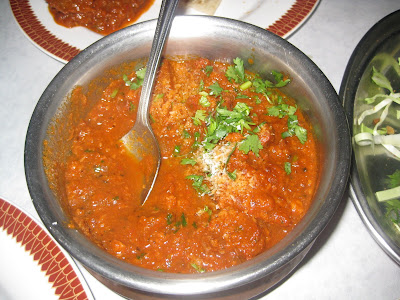 We were definitely curious about the Lobster Karahi -- we've never seen lobster on the menu at an Indian restaurant before -- but neither of us were interested in spending $22.95 on our entree at the time. That one is on the list of things to go back and try. For this visit, Nick got the Lamb Madras (a more affordable $14.95). It was a unique blend of textures for an Indian dish: there were chunks of lamb meat, plus ground lamb. It was all in a South Indian-style coconut curry sauce. We ordered it (and my dish) mild. 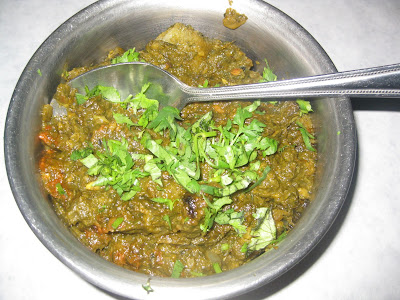 I got the saag aloo (spinach and potatoes). It was good, not great. I'm not generally a big potato fan, but dishes here are served family style (as is typical at Indian restaurants), and Nick likes potatoes.

I'd definitely go to Mezbaan again. It's a solid Indian food experience. If Nick still lived in Pasadena, I'd say we should go try out their happy hour specials. If YOU live in Pasadena, feel free to try them out and leave me a comment :) I'll live vicariously through your "Whatever."

Can't get enough Indian food? (Who can?) Keep the conversation going at www.facebook.com/saagahh.
Posted by Sree at 10:06 PM