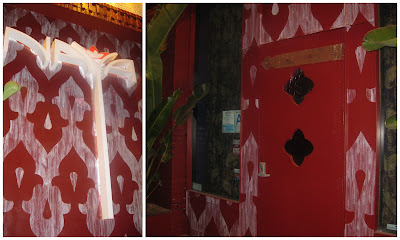 Just opened Naya in Silver Lake refines Tantraz (previously in its location and with some of the same staff) and gives the space a complete makeover.

After driving over an hour in stop-and-go traffic (in what we'd, foolishly, thought would be a 15-minute trip), we arrived at the doors of just-opened Indian restaurant Naya in Silver Lake. Except as we pulled up to the $5 valet, Nick scanned the space and said, "We've been here before." Thank God my keys were already in the valet attendant's hands or I may have erupted in a serious case of road rage. After hearing the buzz all over LA that a "brand new" Indian restaurant had just opened days before, how was it possible that we'd eaten here months ago?

Well, as it turns out, we'd been here, yet hadn't been exactly here. We'd been to Tantraz, which had the same chef and a similar high-end fusion niche, but this was a new incarnation: Naya, that, yes, had just (re-?) opened days before. It has a different owner than Tantraz did, and an improved interior design. The chef too has improved and been more precise in carving out a niche. And there's a cool lounge now too.

The design of Tantraz was too bank vault-esque to me, but Naya comes to life with flowing feminine white fabrics and a much more romantic feel. Nick said it felt like we were inside a wedding. Naya has a connected lounge with its own entrance that is moody bronze. The lounge serves the full restaurant menu and a unique happy hour menu is in the works. The specialty cocktail list is fun, with drink names like Spa in Goa, Buddha's Bed, and The Hot Yogi. Both the restaurant and the lounge are great date places and the large booths would be great for a birthday party or other festive occasion. Service was great, and I'm hoping the staff will be able to keep that up over time. The big negative is the parking still sucks (plan to pay for valet if you don't know the area). Also, our seats were near the restaurant entrance and for part of our meal we could smell car exhaust from cars idling just outside. Also, there's a ton of fish entrees at the menu, so the restaurant smelled heavily of fish for part of our meal. I love fish, but it was odd to smell it when we weren't eating it ourselves. 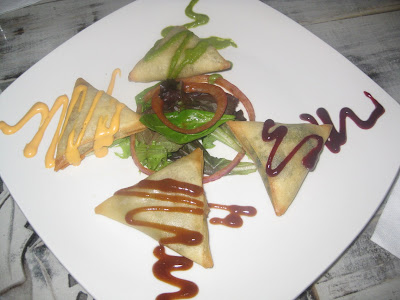 We knew as soon as we saw the samosa (spelled "samoosas" here, and I'm not sure why) that it was Tantraz chef Imran Ali. (We confirmed this later.) One of our friends, Amrapal, refers to them as "designer samosas." These samosas have a frilly garnish and are a-little-too-perfect little crispy triangles. They also have hit-or-miss creative fillings. We got the assorted samosas, which were four different fillings. The potato and peas is the traditional samosa. Feta cheese, arugula, and walnut made for a somewhat sweet appetizer. Spinach and tofu tastes like spanakopita. Kidney beans and nacho cheese was fun. At first, Nick didn't like it, but then remarked it'd be cool at an Indian fast food joint. I really liked it, but I'm a huge fan of nacho cheese (not my best moment, I admit). No free papadum here, by the way, I'm wondering if the restaurant will add it as its working out the kinks. 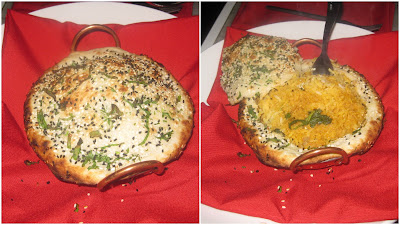 The food is progressive, and I love the creativity. And taste-wise it's better than Tantraz's was. (Hence, the extra pepper in the rating.) Nick got the Naya Pot Pie with lamb. (It's also available with vegetables or with chicken.) It wasn't exactly what I expected -- I thought it would be Indian-flavored chicken with the other typical pot pie ingredients. This was actually biryani in a naan-lined and topped copper bowl. It had a cool presentation though. One of the employees emerged to cut the top off of the pie, which made it all fancy. In addition to what you see in the photo, there were also big chunks of lamb under the rice. Nick said he liked the little bits of lamb mixed into the lamb better than the big chunks, but for $18, I was happy that the big chunks were included. 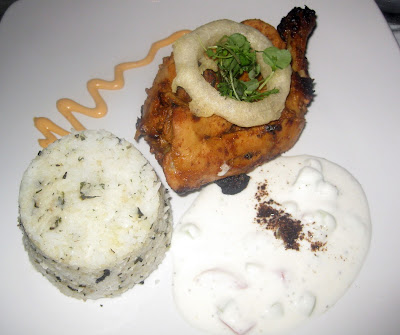 I ordered the Tandoori Cornish Hen. Honestly, I ordered this because I was starvvving after being stuck in traffic for so long, and I envisioned the glory of having a mini-chicken all to myself. That wasn't exactly true. The Cornish hen piece was the size of about one and half chicken breasts. But it's OK. The five-spice blend was delicious and the chicken was cooked perfectly. Plus, as is my norm, after a few bites my stomach was full anyway. I was especially impressed with the Raita on the plate. It had a lot of cucumber in it, and, for probably the first time, I liked the yogurt side. 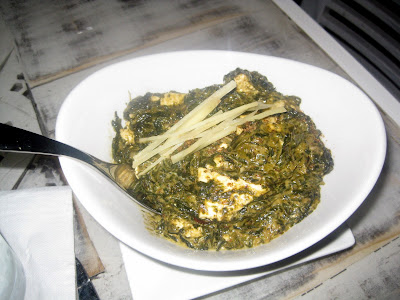 We ordered Spinach with Cheese a la carte. (The spinach is also available with cheese or with corn.) This dish was truly delicious. It may be the best Indian spinach I've ever had. Even Nick liked it, and he normally claims to like vegetables while leaving all of them untouched on his plate. He was scarfing this one down. 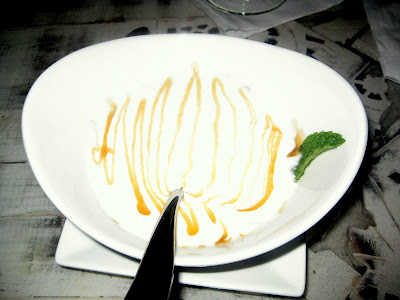 The dessert, Nick suggested the Chocomossa, but I reminded him that the chocolate samosas weren't that great last time. So we got the Cardomom Infused Rice Pudding & Ice Cream instead. Taste-wise it was yummy and the drizzled caramel was a nice touch, but the ordering process was confusing. Looking at the menu again now, it makes more sense. The restaurant wants you to pick a sauce to have drizzled over it: mango, caramel, chocolate, or rose. (When I read it the first time, I thought it meant all of those flavors would be included in the dessert, especially since we weren't asked which flavor we wanted.) I'm not really sure where the ice cream part is though. Maybe it was mixed into the pudding? It tasted like a light kheer with caramel sauce.

If you're in the area, I do recommend checking out Naya, though I'd advise waiting a few weeks to let it work through its growing pains. The restaurant is still waiting on its hard copy (not paper) menus and its lounge menu. The website just went up, so you can check out more photos and a chef bio there. I recommend making a reservation before you go, especially if you want to go on a weekend. (On this weeknight, the restaurant was about 1/3 full.) And leave early!

Join us on Facebook: www.facebook.com/saagahh.
Posted by Sree at 8:48 PM