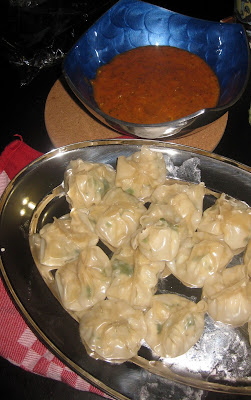 Here's an easy recipe for delicious fresh Nepalese-Tibetan dumplings. (Thanks to Rubina for the recipe!)

FOR THE WRAPPERS:
~50 store-bought wonton wrappers (available at most grocery stores, in the refrigerated case near the tofu)
cooking spray 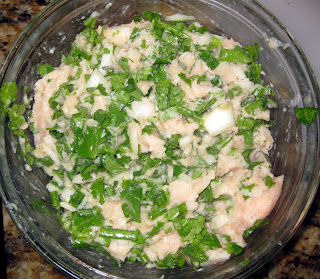 1. Make the filling: Mix the 11 filling ingredients (chicken, onion, spring onion, cilantro, ginger-garlic paste, cumin, coriander, salt, chili powder, oil, and water) together in a mixing bowl and let it marinate in the fridge for 30 minutes.
2. In the meantime, make the sauce:
a. Fry the diced onion and garlic together until the onion turns translucent. 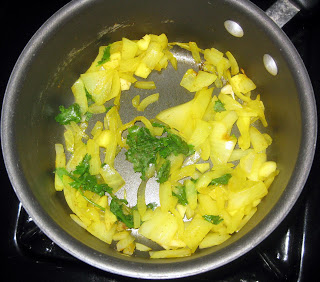 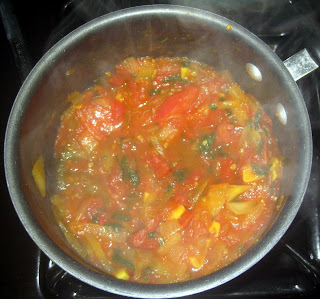 e. Add the cilantro and (optional) peppers. Turn off the heat.
f. Add the teaspoon of sesame oil. 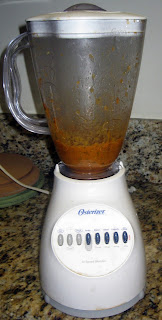 g. Put it all in a blender and blend until smooth. Pour into a serving bowl. 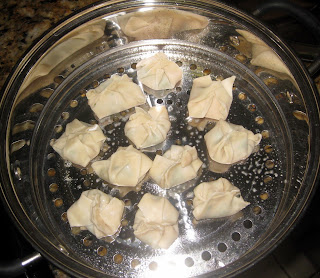 3. Lay a wonton wrapper flat. Scoop a small amount of the filling into the center. Use your finger to apply water to the wrapper edges, then fold it closed. Continue filling and sealing wonton wrappers until you have at least enough to fill up your steamer (about 11 in mine). 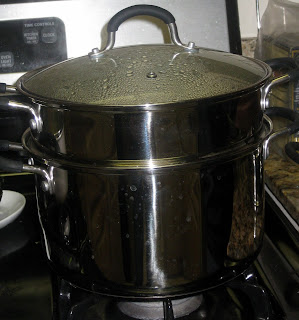 4. Spray the steamer tier with cooking spray. Boil water in the bottom of your steamer. Place the uncooked momos on the tier, making sure to leave gaps in between so the steam can come through. Place the tier on top of the boiling water, and steam for 8 minutes. Remove momos from steamer, and put in your second batch (which you can make while the first batch steams, or have your guests help fold them when they come over). Serve with the tomato dipping sauce.

The AHH Factor: Momo making was going great. Even though it was the first time I'd ever made momos, the Nepalese-Tibetan dumplings that Nick loves (and his whole family is experts at making), I was confident. I'd seen momos made before and gotten a fool-proof recipe from Nick's cousin Rubina (that's her recipe above, with some slight tweaks based on what I had on hand). Nick was even helping me fill and fold the wonton wrappers. It brought back fond childhood memories, I think.

His mom (AKA my new mother-in-law) was in Los Angeles on vacation. Nick suggested I impress her by making a Nepalese dish, and, since we'd gotten an awesome steamer as a wedding gift, momos were the obvious choice. And Rubina, who lives in Denver, was being amazingly helpful with all of my dumb questions, including ones I was sending her via text message while I was mid-prep.

So, what could possibly go wrong?

As I'm trying to be witty around my mother-in-law, brother-in-law, and my sister (who was in town from Houston), my first brother-in-law (her husband), and keep an eye on my rambunctious 2-year-old nephew, Nick asks me a question. "Hey, are these momos done?" I steal a quick glance at the steamer, where the momos I'd set down about 5 minutes ago but hadn't yet steamed (the serving tray was full) were sitting. "No," I replied, "but I'll go ahead and steam them now." Nick gets a weird look on his face. "Uh, cause I just ate one."

AHH. Apparently, I should have been watching 29-year-old Nick, NOT 2-year-old Sanjay. Holy crap. I had no idea what to do. Make Nick throw it up? But he'd already eaten a bunch of other appetizers, so that seemed even grosser than what the uncooked dumpling could be doing to his insides. Plus, oh my god, his mother was standing just in the other room and if she found out what was going on, she was going to be so appalled that I can't even steam a freakin' momo properly. My head was just spinning. Nick, despite the fact that he/we may have just given himself food poisoning, was the calm one. He ushered me out of the kitchen and assured me he'd be fine.

We both managed to eat the rest of the meal. Nick, ever the sweet tooth, even ate several desserts, apparently already over the food scare. I, however, ever the worrier, researched all the foodborne illnesses I could think of over the next few days. But at the time I'm writing this two months have passed, and I am happy to say that no momos have been thrown up, purposely or otherwise.

Next time I make these I am kicking Nick out of the kitchen. Oh yeah, and according to his mother's (only!) critique, adding more salt.

Get more saagAHH on Facebook: www.facebook.com/saagahh.
Posted by Sree at 8:13 AM