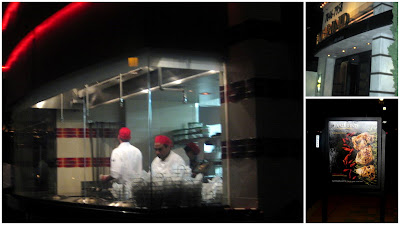 Newly opened in Newport Beach, Tamarind of London inherits buzz from its Michelin star-earning sister restaurant, but, while the food is flavorful, it doesn't quite meet the hype.

As I was changing into my "nice" clothes in the cramped bathroom of Crystal Cove Promenade's Pier 1 Imports, I had a realization. I am not the target demographic of Indian restaurant Tamarind of London. If I was, I'd have a second home in Newport Beach, where I would have changed in a leisurely fashion into my "everyday" clothes, then dropped $100 on dinner at the newly opened Tamarind without a second thought. Or I would have gone on a vacation somewhere that wasn't a essentially a staycation -- we'd just drove into Newport from a one-night trip to San Diego, during which I petted goats at the San Diego Zoo's Safari Park -- and would have been wearing nice clothes to begin with.

But alas, Nick changed clothes in Starbucks and I changed in Pier 1, and together we made it on time to our reservation at Tamarind, probably the most buzz-worthy Indian restaurant to open in Southern California this year. Tamarind of London (as the name says) is a British import and its sister London restaurant has even earned a Michelin star, hence the buzz. Some of the menu items are even directly brought over from the London restaurant (and are indicated as such on the menu). The Newport Beach restaurant opened in Crystal Cove Promenade about two weeks ago.

For those of you haven't been, Crystal Cove Promenade is a mid- to high-end shopping center (at which I spent an embarrassing amount of money buying peacock feathers at that Pier 1). The good news is, unlike downtown Newport, there is a lot of free parking here. (There's also valet at the restaurant; it's $4.) And, though most patrons at Tamarind were dressed up, there were a few patrons there wearing jeans.

The coolest thing about Tamarind's look is the exhibition kitchen. You can literally see the tops of the three tandoori ovens and the chefs were all dressed in starch white preparing orders. I found myself wondering what would happen if one accidentally spilled butter chicken sauce all over his white uniform. Luckily, there were no such party fouls during our visit.

Most of the color scheme is earthy browns. Nick was impressed by the decor. I wasn't blown away by it, but I think it had too masculine of a look for me. I tend to like feminine flowing fabrics and the like. Still, it looked like a big investment was put into the decor.

It felt a little stuffy when we entered, especially because the first thing we were asked was if we had reservations (highly recommended, by the way). We did indeed have them, so we were walked to a comfortable booth. I guess I see why Tamarind is so focused on reservations though. By the time we left, there were at least 15 people waiting for a table.

Our server was knowledgeable and attentive. So much so that Nick suggested she was "trying too hard" and hoped the service would be a little less in-your-face as the restaurant settles into its groove.

Like many high-end restaurants, the portions at Tamarind are small. I've never understood that. Do rich people eat less? We figured entrees might be small though, so we ordered multiple things to share. Like most Indian restaurants, food here is served family style. 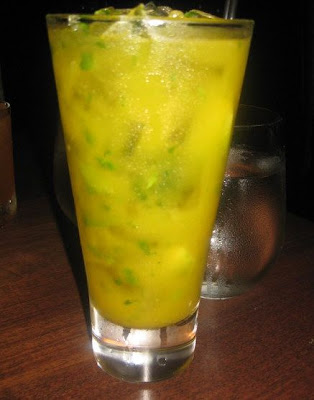 I still had to drive the hour back to West LA after dinner, so I got a nonalcoholic Mango Mojito. (The restaurant also offers a Mumbai Mojito with Bacardi Limon Rum, if you're looking for alcohol, as well as a large array of other creative cocktails.) With just a hint of mango flavor and a generous helping of fresh mint, I found it delicious. When you consider the ice and the lemon quarters in the glass, it was a small portion though. 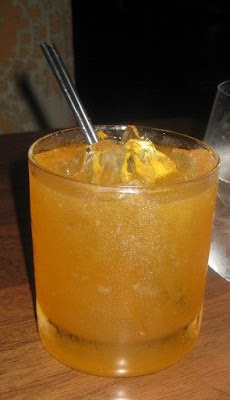 Nick got an alcoholic London Underground. It's a blend of Old Raj gin, lemon, (homemade!) honey, and coriander syrup. Nick said it was so strong it reminded him of a Long Island Iced Tea. I gave it a few sips. I'd recommend it, but yes it is strong. 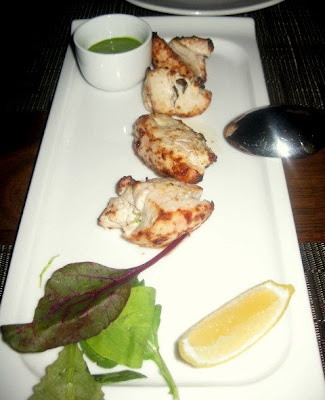 For an appetizer, we ordered Chicken Tikka. It was OK. I was thankful it was juicy, but it lacked flavor without the accompanying sauce. 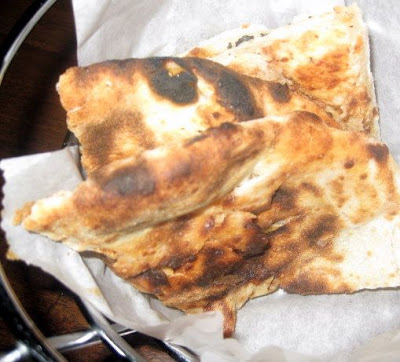 As a special that night, the restaurant had an Almond Date Naan. It was superb. It was a sweet naan that was perfectly cooked and fluffy. The "almond date" part was a paste that was pressed into the naan. The flavor reminded me of the paste in a fig cookie. Nick didn't like that this naan wasn't good for sopping up savory curries though. It was too sweet for that. Honestly, maybe it should be moved to the dessert menu, but most people would probably think a naan dessert was weird. It came with four pieces, which was a decent portion size. 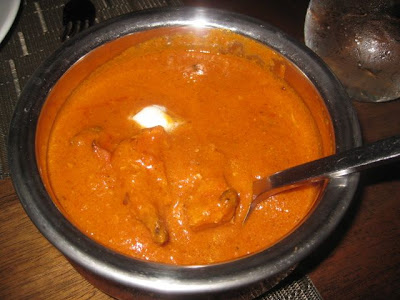 Nick ordered the Butter Chicken, a classic. The sauce was so smooth and so delicious. I loved the flavor. Nick enjoyed the flavor too, but said it was pretty typical of butter chicken, which, because of its buttery delicious ingredients, is kind of hard to mess up. He didn't think it earned the $19 price tag. 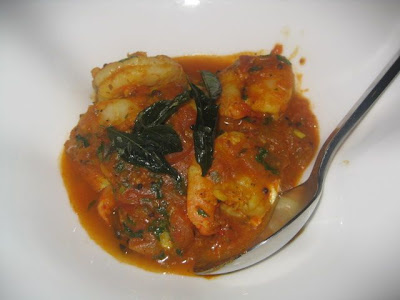 I picked the Prawn Pepper Masala. I appreciated they the spices were used liberally; there were whole peppercorns in there. But overall, the flavor didn't really sink into the prawns. It was just OK. 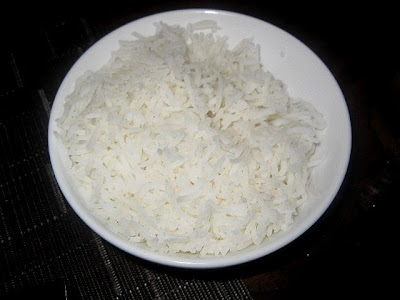 At $3, I thought the bowl of white rice was a rip-off. I initially said we didn't need rice for that reason, but Nick got halfway through his dinner and decided he couldn't finish it without rice. So we got one order of it, but when we got the bill, it was billed as $4. As a stereotypical frugal Indian woman, I was not going to let that slide. I admire the restaurant for how it handled the situation though. I was friendly about the price problem (don't want to make a scene in Newport Beach, after all) and simply asked the server if she could doublecheck the price before she ran my card. She came back super apologetic and said that I was right, the price was $3 and it was the computer that had been programmed incorrectly. She said that because they were now in the midst of fixing the pricing in the computer, the restaurant would just comp our rice. Integrity means a lot to me, so I do appreciate the gesture. (Though I am still tempted to sneak in $0.10 worth of rice with me next time!) 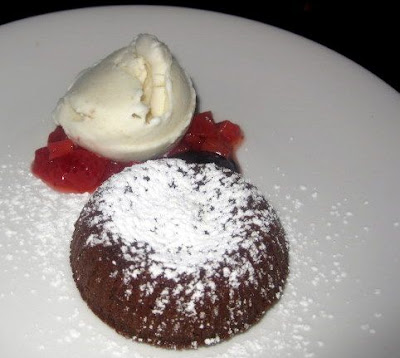 Tamarind offers a mix of traditional Indian and fusion desserts. We opted for fusion, with the Seven Spice Molten Chocolate Cake. Highly recommended! It was a creative lava cake, in which Indian spices flavored the chocolate. I was impressed that you could taste the spices through the chocolate. As I discovered when creating my Dark Chocolate Coconut Curry Bark, it is a challenge to get Indian spices to push through strong-flavored chocolate. Nick said the cake was the best thing on the entire menu.

The total damage to our wallets? $93, before tip. For us, the food was certainly above average, but the quality didn't justify the price. If you're in Orange County and it's quality Indian food you're looking for, I'd suggest Traditions in Tustin.

But it's not just about the food at Tamarind. It's about the entire experience -- the exhibition kitchen, the creative fusions of ingredients, and the customer service. (As we exited, an employee, most likely a manager, actually said bye to Nick by name, presumably because of his OpenTable reservation.) So, to that end, I say, if you're the restaurant's demographic -- with expendable income and interested in buzz-worthy place to eat on a Saturday night -- then get on OpenTable and make that reservation. If you're not that demographic, I'd suggest the restaurant's happy hour, which is at the bar only and offers discounted drinks and a limited menu, just to see what all the fuss is about.

For me, personally, it's not worth it to make that drive again, but I'm glad I made it once.

And I'm putting my petting zoo jeans back on.