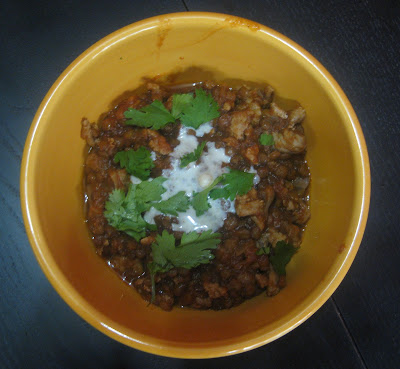 Substituting spices commonly used in Indian food (like cinnamon and ginger) for typical chili spices and substituting lentils for kidney beans is the base for this sweet and spicy Indian-inspired chili. 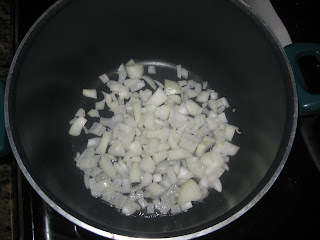 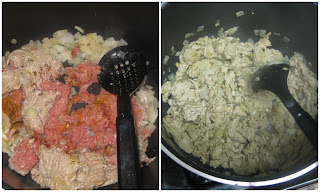 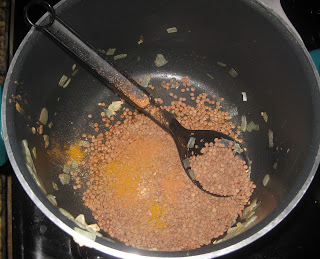 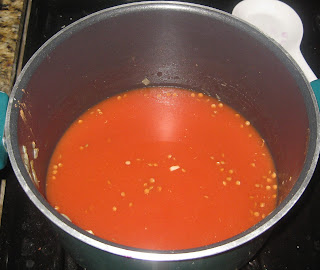 4. Add the 4 cups of broth and the can of tomatoes (including the sauce). Bring to a boil, then reduce the heat to medium low and simmer, partially covered, for 20 minutes. 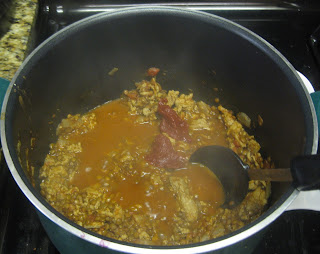 5. Add the cooked turkey and onions back into the Dutch Oven. Add the 1 Tbsp. tomato paste. Stir through. 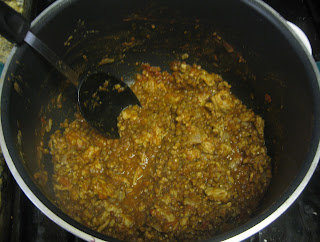 6. Cook with the lid off for about 10 minutes or until the chili reaches the desired consistency and the lentils are tender. 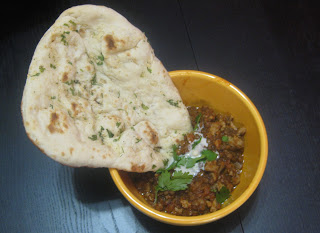 The AHH Factor: When I was in college, homemade chili was one of my go-to meals. It was so simple (pour everything into one pot), yet gave me the satisfaction of making my own dinner. The smell of the spices was terrific. Back then, I only made chili the typical way -- with spices like chili powder and cumin and with red kidney beans.

I preferred making chili to buying it because back then I could only find beef-made chilis for sale. But in recent years, that's changed. I find turkey chili everywhere, and I especially love the turkey chili in a can at Trader Joe's. It's perfectly seasoned and makes a great lunch, especially topped with some shredded cheddar.

While it seems silly to me to spend my time making a pot of turkey chili when I can easily buy it, I'm still a bit wistful for the days of homemade chili. So I started thinking of ways that I could make it unique -- something I couldn't easily buy in a can or at the deli. That's when I came up with the idea of making it a little bit Indian -- replacing the chili power and cumin for the spices I typically put in my Indian entrees, like cinnamon and ginger. Then I thought about replacing the kidney beans with lentils. (A quick Google search showed me that lentil chili recipes are rampant, which I took as a good sign that adding lentils to chili wouldn't be too weird.) And I wanted to top it off with bit of raita, as a replacement for the traditional sour cream.

The result tastes amazing, a chili that's a little bit sweet and a little more spicy, plus healthier than your traditional beef-and-beans variety. Plus, it'll make your home smell amazing.