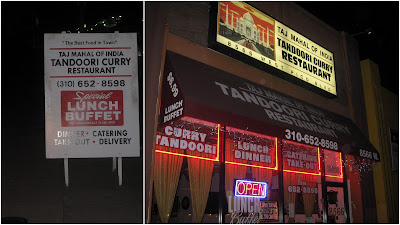 Taj Mahal of India is a decent option if you live close by, with its meat curries being some of the best menu options.

My cousin Annie had come all the way out from Washington D.C. for our housewarming party, and, having a decidedly spicier palette than I do, she's great for a different perspective. We also brought Nick's brother, Bobby, with us to Taj Mahal of India, which, if I remember correctly, we found through a Google search.

It was a Sunday night and I was a bit worried when we walked in and I noticed that we were the only customers in the place at first. More people came in later. I get the feeling this place gets more take-out customers than dine-in customers. (The restaurant offers free delivery within 2 miles.) If you are going to dine-in here, Sunday night is probably the best time parking-wise. The meters aren't enforced, so our parking was free.

Inside, the color scheme is traditional reds, with wall hangings and beads as art.

Our server was intrusive. He kept interrupting, and he asked twice in one minute if we were ready to order. Also, he had trouble understanding our orders.

The menu was a bit suspect because it included hummus and beef samosas. And misleading because it lists Fanta, but when Nick ordered it, a Sunkist came out. Not even close, guys. Also, the restaurant doesn't automatically bring out free papadum, but when we asked, the server brought us papadum and said it was complimentary. The papadum had good flavor and was satisfyingly crispy.

We ate all of our dishes family style. Portions seemed smaller than at similar restaurants. 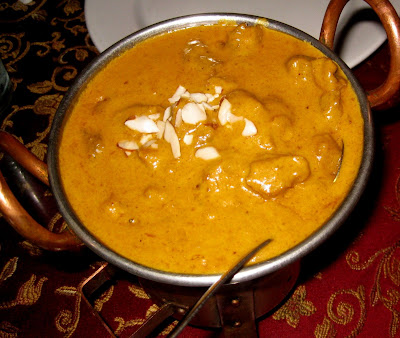 The Lamb Korma was the best dish, with small pieces of lamb in a flavorful sauce. We ordered all of our dishes at a medium spice level, and that was a good call for this dish. 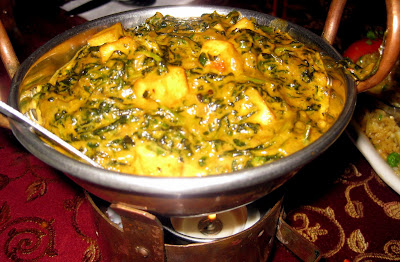 The Saag Paneer was just OK. Even though we ordered it medium, it tasted mild. The paneer pieces were small. 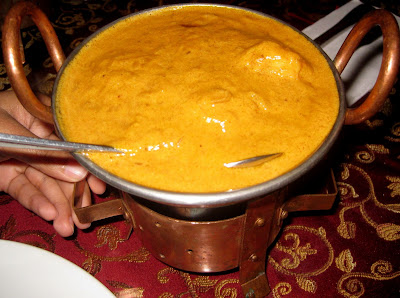 The tasty Shrimp Malai Curry was done well. Nick and I both thought it had a spicy kick, but Annie said it tasted mild. She is her father's daughter in that way for sure. I still remember the time my uncle (her father) made a dish for a potluck at the temple. It was literally so spicy that virtually no one -- including all of the Indian-born parents who were raised on spicy food -- could eat it. I'm in awe of this branch of our family's propensity for spice. 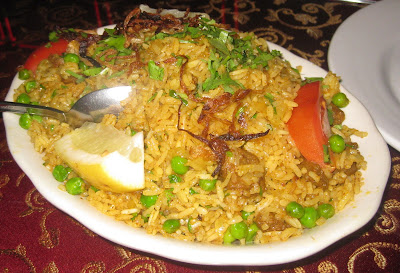 We weren't asked what spice level we wanted our Lamb Biryani, but the consensus was that this dish was the spiciest. Oddly, I actually didn't think it was spicy (my vote for spiciest was the shrimp), but my theory is that's because I expect biryani to be spicy. (Though sometimes it can go overboard.) 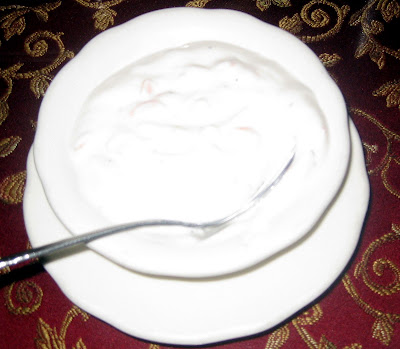 The Raita wasn't spicy at all, of course, but it was odd in that it was thicker and creamier than is typical.

All in all, I wouldn't dine in here again, but if I lived close by, I'd likely get take-out on occasion. All four of us thought the dishes were average or slightly above average, and the restaurant keeps its prices on the low end.

Join us on Facebook: www.facebook.com/saagahh.
Posted by Sree at 11:32 AM