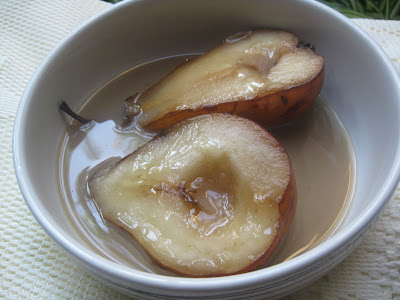 Poaching pears in chai turns into a decadent treat that's perfect for dessert or breakfast.

You'll Also Need:
a large skillet, a tea strainer or other sieve 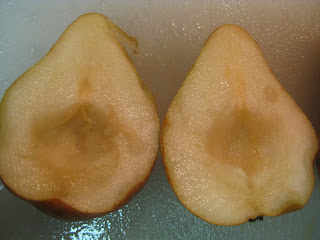 1. Slice the pears in half and core. 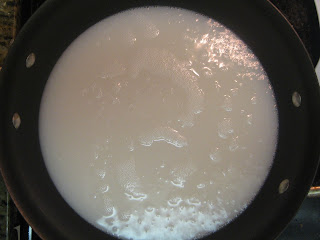 2. Bring the 3 cups of water and the 1/2 cup vanilla almond milk to a boil in a large skillet. Once boiling, shut off the heat. 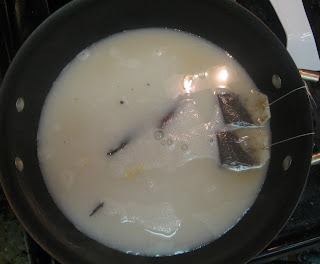 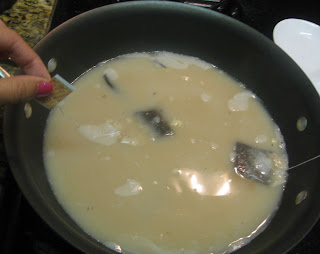 4. Steep for five minutes. I sort of swirled the tea bags through the liquid to make sure the flavor distributed, but that was probably unnecessary. 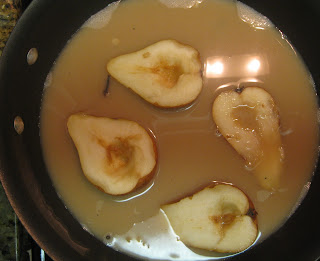 5. Add the pears to the skillet. Let cool a little. 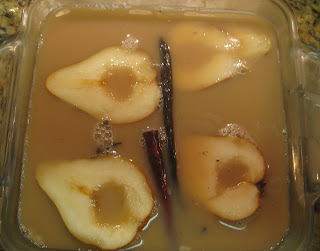 6. Put in the refrigerator for several hours (or overnight, if you're doing a make-ahead breakfast). My skillet isn't really supposed to go in the fridge, so I moved it into a different dish. (Also, I didn't like that the pears weren't really submerged in my big skillet.) 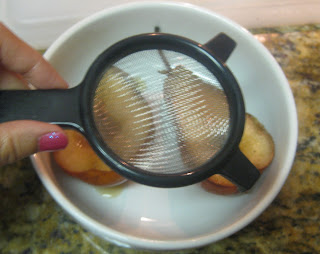 7. To plate: Place two pear halves in a bowl. Pour some of the liquid on top, using a tea strainer or other sieve to strain out the solid spices. 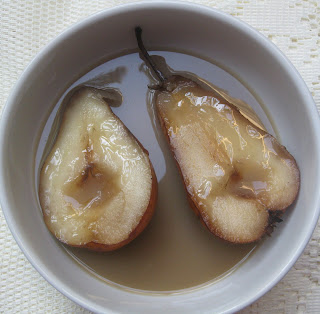 The AHH Factor: This recipe is a prelude to a more ambitious recipe that's still forming in my head, but I realized that the poached pears on their own make a decadent dessert or a fancy breakfast so I wanted to share what I have so far. Minus one failed attempt to poach salmon a few years ago (I overcooked it), this was my first time poaching something. I didn't exactly know how the process worked, so I used this New York Times recipe as a guide, then subbed out all of the ingredients with the ingredients I would use to make chai.

As I was splitting the vanilla bean, I started to get worried about another poaching disaster. Was it worth it to waste a heavenly smelling (and pricey) vanilla bean on something that might not turn out right? Luckily, that philosophical question remains unanswered because this turned out AWESOME. I'd planned to eat it as dessert, but at 10:30 p.m. when it still hadn't cooled all the way (I'd stuck it in the fridge at about 9 p.m.), I decided it had all the components of breakfast too (fruit, tea, honey -- that works, right?) so I saved it for the morning.

When I removed the cling wrap from the concoction, I really started getting my hopes up. All of the spices had blended together and it smelled so good. I didn't even know if I could wait until I took the photo to try it. (Of course, I have been known to accidentally eat something, then resort to taking a photo of a half-eaten whatever....Somehow less appetizing...)

It tasted more indulgent than I expected. I was kind of worried the pears wouldn't have absorbed the flavors that well because I left the skin on (I felt too guilty about peeling it off; I don't like throwing away stuff that's edible), but I needn't have worried.

Oh, and about those expensive spices. They are a little less expensive at Penzys. Penzys sells vanilla beans three to a tube, and I think I paid about $9 a tube. There's a Penzys in Santa Monica and one in Torrance, so check that out. (It's primarily a mail-order company, but I'm not sure how much shipping adds to the cost.)