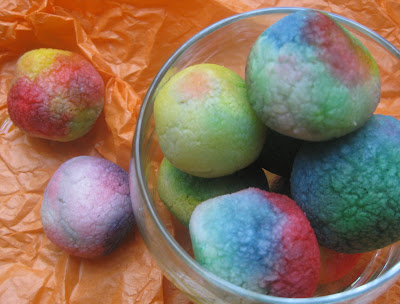 Holi, the South Asian festival of colors, is celebrated in a big way in Los Angeles, and this fun project will make your table as festive as your dye-smudged face.

Ingredients:
store-bought (or homemade) rasgullas or other white Indian sweet (I used Bikano brand from All Indian Sweets & Snacks)

You'll Also Need:
disposable gloves, bowls or glasses to put the food coloring in, several different spoons to stir with, a tea strainer or other sieve, cheesecloth cut into several small pieces 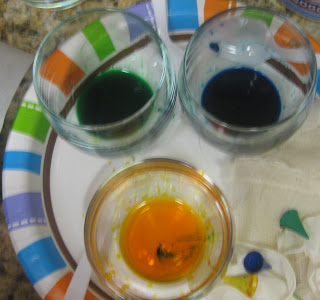 1. Slip on the disposable gloves to protect your nails and fingers from being dyed (though most food coloring does easily wash off). Take your bowls or glasses and pour a splash of clear drinkable alcohol into each. Pour several drops of one color of food coloring into each bowl. Stir with a spoon so the color is distributed evenly, keeping different spoons separate for the different food colors. (The alcohol is used so the food coloring dries quickly, since alcohol evaporates faster than water. The small amount doesn't really affect the taste of the sweets. However, if you're doing this with kids, substitute water. I haven't tried it yet, but I'd imagine that water should work fine too.) 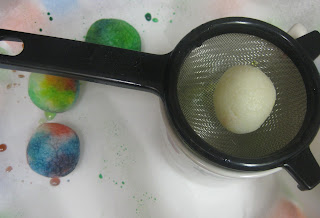 2. Set the tea strainer or other sieve on top of a glass, then put a rasgulla on top. This is just to separate as much "ras" from the "gulla" (AKA get rid of the syrup) as possible, so that in addition to the food coloring mess potential you don't get the potential of a sticky sugary mess. 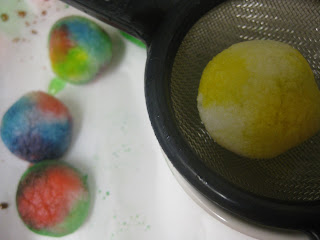 3. Dip one of the cheesecloth pieces into your first color (generally the lightest color works best, like a yellow), then dab it onto the rasgulla in one to three places. 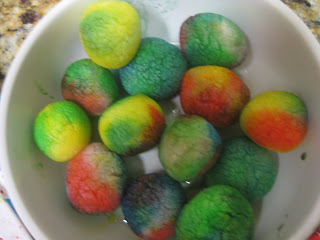 4. Using the same method as in Step 3, add one to three more colors to each rasgulla. (Keep each piece of cheesecloth exclusive to each color.) I personally liked it best when I left small gaps where the rasgulla was still plain (undyed), which also kept the colors from running together. Try experimenting with different base colors and different accent colors. If you want the entire rasgulla to start as a solid color, roll it around in whatever you want your base color to be first, then use the cheesecloth to add accents. 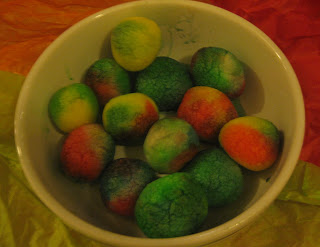 5. Pour the syrup over it and serve.

Servings vary, depending on how many sweets you start with -- I'd estimate two per person.

The AHH Factor: I had great visions of how I was going to dye these sweets. I Googled countless phrases like "best Easter egg designs" and "patterned Easter eggs." Visions of purple polka-dotted rasgullas and argyle ones worthy of a J. Crew catalog were dancing in my head. Was it possible to wrap rubber bands around a rasgulla and tie-dye it?

Mind you, this was before I actually opened a bottle of food coloring and attempted to dye anything. It was before I even had a bottle of food coloring to experiment with (a huge thanks to my friend Nicole for the food coloring, by the way!). Then the more I started searching and the more elaborate designs I saw, coupled with the fact that many Easter eggs aren't actually edible, I got a little shaky. Creativity may be my strong suit, but art and drawing, well, let's just say that even my polka dots would somehow end up as squares.

Then I had an epiphany: Holi isn't about perfect patterns of color. It's about the excitement of spring and flinging colors onto unsuspecting strangers in happiness. It's about smudges and smears and streaks that are without rhyme or reason. That's why I ultimately decided on simply smudging the colors on. I imagine that these rasgullas are what you look like after attending a Holi celebration, with color blobs all over your white shirt. Happy holi, everyone!

P.S. If you want to celebrate Holi in Los Angeles, there are two celebrations where you actually get to throw dye on people (on other participants, not on random people).

saagAHH just launched Events calendar where you can find out about other upcoming events of interest to the South Asian community in Southern California. Click on the Events tab to find other fun events to go to this year.
Posted by Sree at 8:22 AM