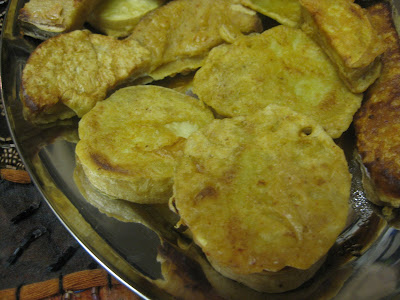 These pakoras are shallow fried in olive oil. Picking nutrition-rich colorful and organic vegetables adds to the appealing aspects of this recipe from my friend Shivani. 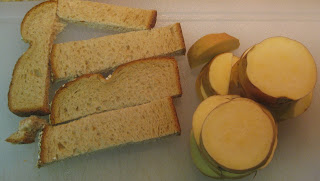 1. Slice the sweet potatoes and the bread into thin even slices into whatever shape you like. 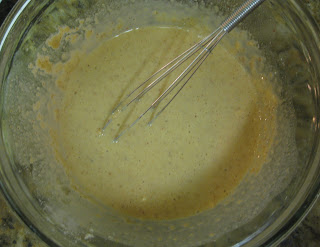 2. In a mixing bowl, whisk together the chickpea flour, cumin, chili powder, salt, and water.
3. Pour the olive oil into the skillet or karahi, just enough to coat the bottom of the pan. Heat on a low-medium to medium flame. 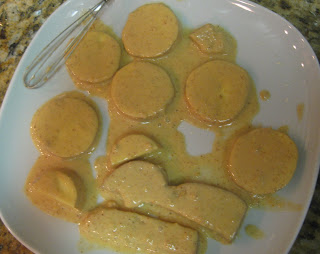 4. Dip the sliced potatoes and bread pieces into the chickpea flour batter, making sure to coat both sides. 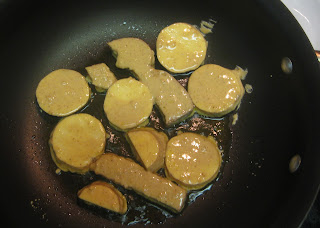 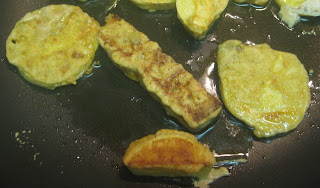 5. In batches if necessary, shallow fry the battered potatoes and bread. Use tongs to place the items in the pan and let them fry for about four minutes on the first side. Then flip and fry about four minutes on the second side. I didn't move them around except to flip them. I'd recommend not crowding the skillet as much as I did. The batter ran in some cases causing multiple pakoras to stick together (though it was easy to pull them apart). 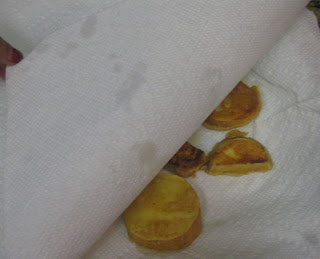 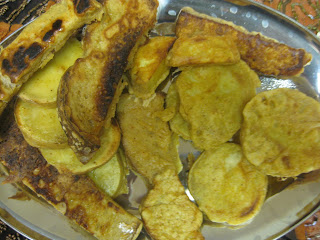 7. Transfer to a serving plate and serve while hot.

Serves 4 as an appetizer.

The AHH Factor: You know how panko is so trendy? Any recipe that calls for breadcrumbs is suddenly being reinvented with these Japanese breadcrumbs to lighten its texture. Well, as much as I love panko (and I love it a lot), now that I've cooked with chickpea flour, I am Team Chickpea Flour. I so want it to be the next big thing in the category.

I can't speak for what makes panko so great (except for its texture), but I know what I love about chickpea flour. First is the smell. As soon as the pakoras were in the skillet for all of about 60 seconds, the nutty smell filled our kitchen. It reminded me of when my mom would make all sorts of bhajas (fried foods) when I was growing up. I always sort of wondered how she got that smell, since I sometimes coat items in regular flour and never noticed any smell resembling it, but now I realize it's straight-up coming from the besan (what chickpea flour is usually referred to as in Indian culture). I think I could have made these pakoras without any of the seasonings, and Nick and I still would have gobbled them up just because of the flavor of the chickpea flour. Second, it has impressive nutritional stats compared to other flours, including sizable amounts of protein, fiber, and iron. Third, it's even gluten free. What's not to love?

Pakoras are traditionally deep fried. When my friend Shivani Agarwal posted a photo on her Facebook page captioned "healthy pakoras", I had to ask her about them. Turns out she uses olive oil for the frying, commenting "pakoras don't soak up olive oil as much as other oils." She also uses organic vegetables. (She used regular potatoes to make hers, but since I'm not a fan of those, I substituted sweet potatoes. You can use any vegetables you like.)

I'm not sure how much olive oil she uses, but I thought shallow frying instead of deep frying would be a great way to safely use the oil. Olive oil has lower smoke and flame points than the oils typically used to make pakoras, so I didn't want to risk deep frying it and having it burst into flames. (If you insist on deep frying these, I'd recommend canola oil, which can withstand more heat than olive.) I still blotted them off at the end, though there wasn't much excess oil to remove.

Now off to make more recipes for Team Chickpea Flour.