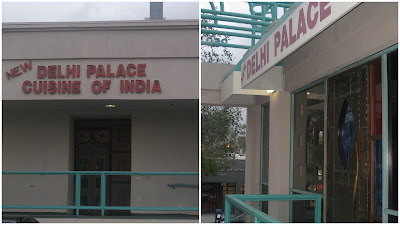 A solid choice for Indian food, New Delhi Palace offers a range of well-prepared dishes. The Tandoori Chicken is a must-try.

Nick and his brother Bobby keep New Delhi Palace on hand as one of their solid dinner standbys, when they're not in the mood to try something new and just want to enjoy Indian food, knowing that the items will be delicious. Bobby describes the restaurant as "top tier." Nick says it's a "solid 8."

Located in a small two-story restaurant complex just outside the South Lake District of Pasadena (with free parking in a shared lot on Mentor), New Delhi Palace is on the second floor and marked with unassuming exterior signage. It has an unusually tall door, which on the inside is decorated with a Hindu goddess statuette. During daylight hours, light streams in through the large windows that overlook Colorado Boulevard.

The owner is frequently present. On this occasion, he gestured to our empty naan basket and asked if we wanted more. 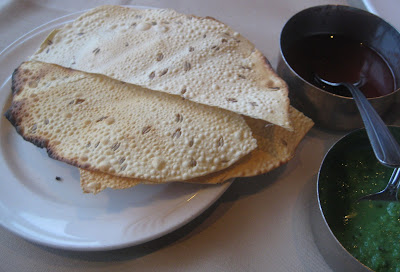 The meal begins with complimentary Papadum and Chutneys. 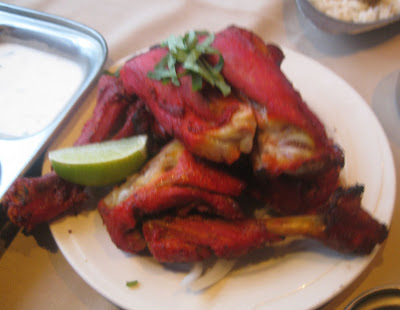 The Tandoori Chicken is a-ma-zing. It is succulent, with a precise balance of flavors that dances in your mouth. It may be the best tandoori chicken I've ever had. Usually I'm good at sharing food with others (especially since I always expect people to share their food with me :) ), but with this chicken I kept tearing off more and more pieces from the center plate, trying to be subtle because I was embarrassed to be eating so much. 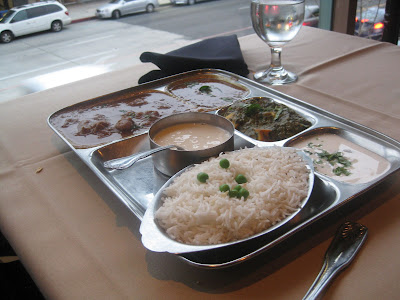 Normally, we order several dishes and share them family style, but this time we tried something different: the Thalis. It's essentially your own individually portioned metal plate that resembles a meal you might have at a home in India. Here, the dinner thalis are $14 for vegetarian and $18 for non-veg. The non-veg plates include the tandoori chicken served on a separate platter (above, which, since I got the veg thali wasn't actually part of my meal, but Nick said I should try his anyway and then I promptly got hooked), and all the thalis include naan served on a separate platter. Shown here is the Lamb Curry option (one of two options for the non-veg thali), which Nick ordered. 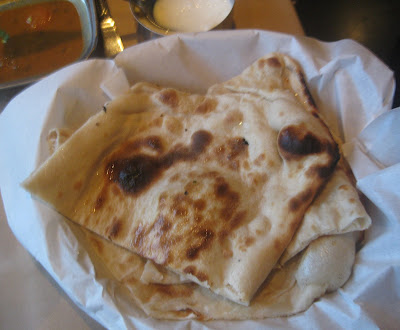 Here is the naan basket, which was tasty and which we quickly gobbled up. 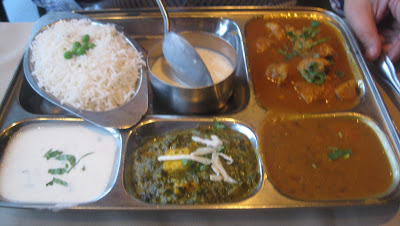 Bobby got the non-veg thali with Chicken Curry, the other meat option. If you're new to Indian food and you don't have the option of a buffet, I'd recommend ordering a thali, especially if you're by yourself and so can't do family style dining, when available. Like a buffet, the thali lets you try several different menu items for one set price (and hopefully means you'll enjoy at least one of the items on your plate). 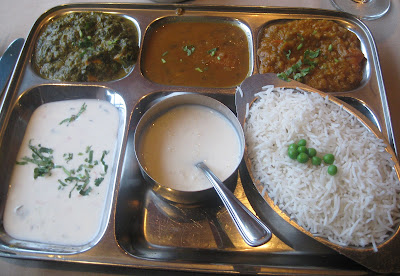 My veg thali included rice, which wasn't seasoned but whose grains were nicely separated, lending it to a pleasing texture.

I usually love eggplant but this preparation was too mushy. Plus, the onions in it were mushy too, which made the eggplant and the onions indistinguishable from each other. I'd ordered my thali "mild," and the eggplant had more of a kick than I expected.

Nick loved the Saag Paneer. After he finished his, he kept digging his fork into mine. Personally, I thought it needed more cream.

I enjoyed the Raita. It was refreshing. I find I'm liking raita more these days.

The other plus about the thali is this one included a dessert. The rice pudding was delicious.

I'll join Nick and Bobby and add New Delhi Palace to my list of standby Indian restaurants. If you're in Pasadena or the surrounding areas, I recommend you make lunch or dinner plans here soon.