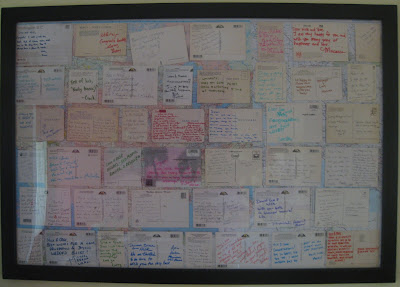 For Nick's and my wedding, our guests traveled from all over the world to attend. He's from Alaska, I'm from Georgia (where the wedding was), we both live in California, and we've both been good about keeping in touch with far-flung friends over the years. It was a party of international proportions.

I wanted to incorporate some travel-themed touches into our event. One idea I had was to have our guests sign postcards instead of a traditional bound guest book. In addition to the cute travel aspects of the postcards, they were practical: there was never a line for the book, where I feel there's too much pressure on guests to hurry up and think of something to say on the spot while another guest is anxiously tapping their high heels behind them in line.

With the postcards, we had our greeters pass them out at the beginning of the ceremony, then collect them at the end. And if you've ever been to an Indian wedding, you know that means you have like two hours (at least) to think of something to write! 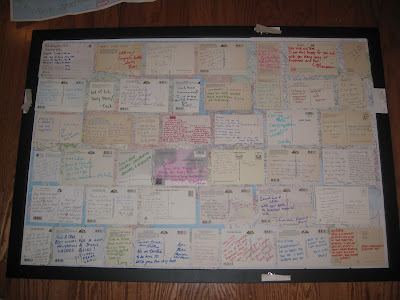 I got the maps from AAA (if you're a member you get maps for free). I purposely picked maps of states that had significance to us. I think the two I wound up actually using were California and Alaska. 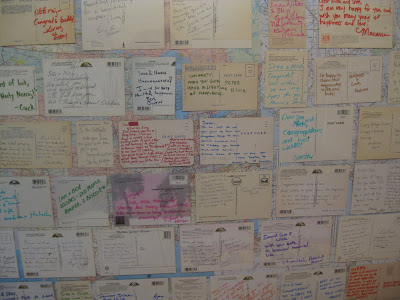 I got the postcards from various sources over the Internet (eBay and Amazon included), plus for the year before the wedding I'd purchase five or 10 each from airport gift shops around the country during business and personal trips.

I used scrapbook tape from JoAnne's Fabrics to adhere the postcards to the maps. I put it all in the largest frame I could find at Aaron Brothers. I had to cut some of the postcards to fit as many as could possibly fit into the frame, making sure I didn't chop off any handwritten messages. (I fit about half of them. The other half I placed in a photo album.)

I love coming home to this map wedding craft greeting us in the entryway.