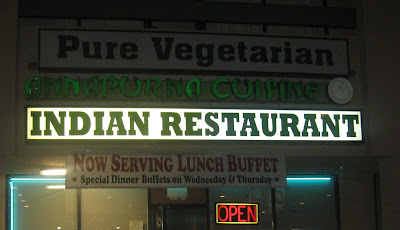 There's a huge variety of Indian restaurants on Venice Boulevard in West LA/Culver City, and Annapurna Cuisine is one of my absolute favorites for two reasons. One, the food is excellent -- it's a totally vegetarian menu but even as a meat-eater I leave feeling satisfied and full. Two, there's free parking in a surface lot, albeit shared with the neighboring businesses in the strip mall.

The look is strictly casual, both from the outward strip mall appearance (it's on the first floor is a two-story building and neighbored by a hodgepodge of other businesses including an Indian grocer) and the inside, which is fairly bare-bones except for the odd computer on the table ("for internet surfing," our server advised) and a filmstrip image just below the ceiling that features Bollywood stars in various cheesy poses.

On this Friday night, the restaurant was three-quarters full, with a mix of Indian and non-Indian customers.

The restaurant's website design is much more impressive than the restaurant's own interior design. On the website, the online menu showcases real photos of what all of the dishes look like. And these aren't stock photos either. I can see the restaurant's tabletop design as the background.

Two great items to try if you find yourself in a South Indian restaurant for the first time are Dosas, lentil "crepes" with savory fillings (potato fillings are common), and Uthappams, savory thick lentil "pancakes" topped with onions, tomatoes, etc. Both these dishes are generally served with Sambar, a vegetable soup made of pigeon peas, into which the Dosa or Uthappam can be dipped, or you can simply drink the soup separately.

If your first try is at Annapurna Cuisine, then try to stop by the buffet. It has a lunch buffet, plus even a dinner buffet on Wednesday and Thursday nights. 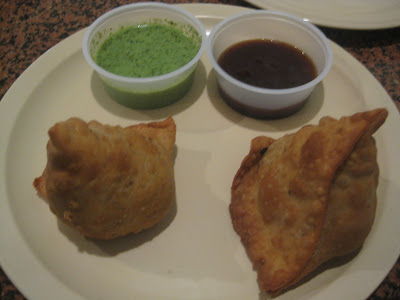 We started with the potato-filled Samosas. These were good, but nothing to write home about. 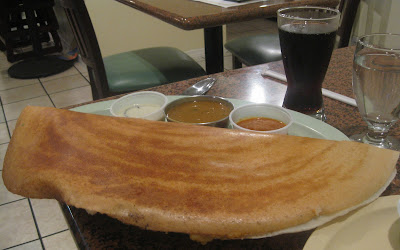 If you're going to write home (email home?), then I'd start here, with the Dosas. As it standard (though exciting to first-timers) the dosa is happily too large for the plate. The restaurant offers over a dozen varieties from plain (Sada Dosa) to Masala Dosa (potatoes) to Spinach Masala Dosas (spinach filling) to "Paper" Dosas, which are marketed as thin as paper and which are usually even larger than other kinds of Dosas. 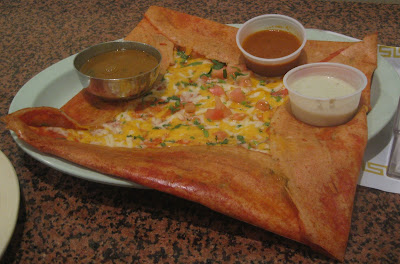 This "Cheese Dosa Annapurna Special" was like nothing I'd ever seen before. Cheese Dosas themselves are fairly common in the U.S. (though not authentic, as the only cheese authentic to India is paneer, which I've never seen plain in a dosa), but I've never seen one served open-faced like this and with such a hybrid of ingredients. In addition to mozzarella and cheddar cheeses, it contained tomatoes and cilantro. It was like a hybrid of Indian, Italian, and Mexican food. It was delicious. 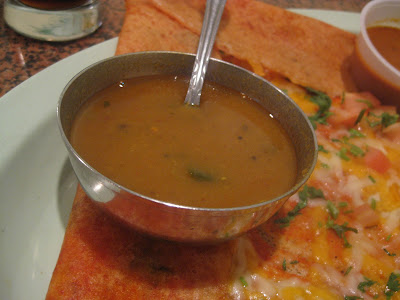 Here's a close-up of the Sambar. Each Dosa came with its own metal bowl of it. 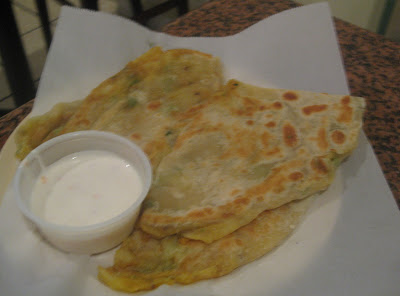 Nick and I ordered way too much food for the two of us (and way too many potatoes), as we also got these Aloo Parathas from the restaurant's bread menu (which also includes roti and naan). It's whole wheat bread stuffed with spiced potatoes and peas cooked in butter and served with a yogurt sauce, and it became Nick's lunch the next day. 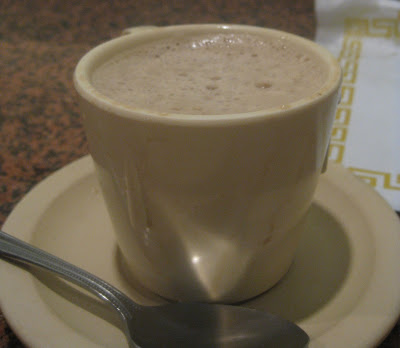 I also opted to try the restaurant's Indian Coffee ("Annapurna Special aromatic coffee brewed with hot milk"), mostly out of curiosity, but it tasted like standard coffee to me (and I felt guilty adding sugar to it), so I'd probably steer you in the direction of the Lassis instead if you want an Indian-inspired beverage.

South Indian cuisine done right, such as at Annapurna Cuisine, is Indian comfort food at its finest. It sounds like a contradiction to say a meatless meal can be stick-to-your-ribs good, but that's really how I felt after eating here. Plus I felt much better than I would have if I'd eaten my usual go-to comfort food dish of mac-and-cheese (though there's always next time).

saagAHH is now on Pinterest!
Posted by Sree at 9:20 PM